The Freight Industry Is Looking At A “Very, Very Ugly” End Of 2022 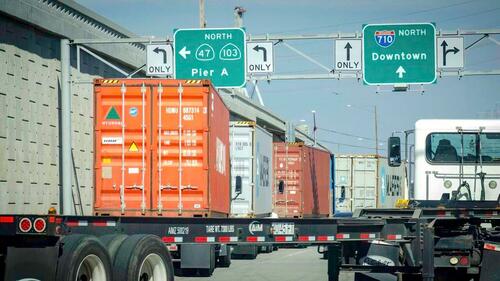 By Craig Fuller, CEO of FreightWaves

For freight companies, this year’s peak will be weak

Peak season, an annual event in the freight industry, serves as the most important season in the calendar for many transportation firms. Depending on mode, peak season kicks off at different points on the calendar, mostly based around the role in the supply chain that a freight provider plays in ensuring that retail goods are on the shelves for the holidays.

With the peak season already completed in ocean freight, we can say with certainty that this year’s peak season will be incredibly weak. 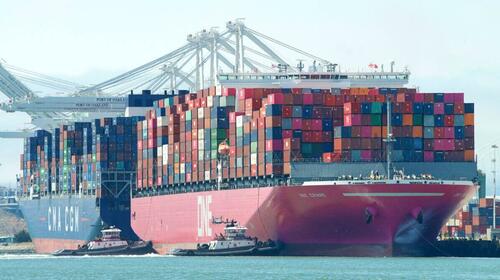 Back in June, FreightWaves reported that ocean container volumes were dropping quickly, based on data found in SONAR’s Container Atlas, which tracks bookings volumes at the point of origin. By tracking point of origin bookings, we get an advanced look at import volumes months before those containers hit U.S. ports. At the time of publication, we believed that the contraction in volumes would happen at U.S. ports by July, but we underestimated how long it would take to clear the backlog of containerships off major U.S. ports and then waiting to clear U.S. Customs.

In August, it appeared that FreightWaves’ warning was unwarranted, at least looking only at U.S. customs import volume data. That data showed the market was relatively stable and hadn’t contracted.

Ocean spot rates and imports fell off a cliff this year

First, we saw container rates collapse – suggesting that carriers were rapidly losing pricing power. When we published our June piece, the cost to ship a 40-foot container from China to the U.S. West Coast was $9,630. Today the same container would be transported for $2,470 – 74% lower than just a few months ago. This happened in a backdrop of a significant number of “blank sailings” by container ship lines. The container lines will cancel voyages to pull capacity out of the market.

According to Sea-Intelligence, container lines have canceled more than quarter of sailings across the Pacific in recent weeks.

Freight transportation is a commodity and responds to the laws of supply and demand. The collapse in container rates reflected volumes that were quickly deteriorating. 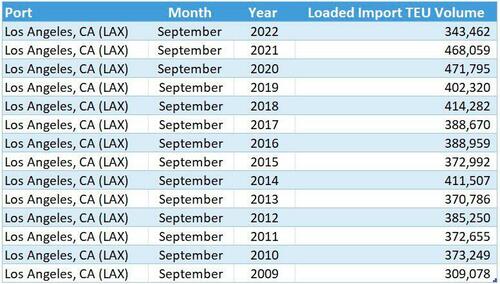 With an estimated 75% of U.S. container imports related to consumer activity, a sharp drop in volume provides an ominous warning for any mode of transportation that is further downstream and closer to the point of consumption. 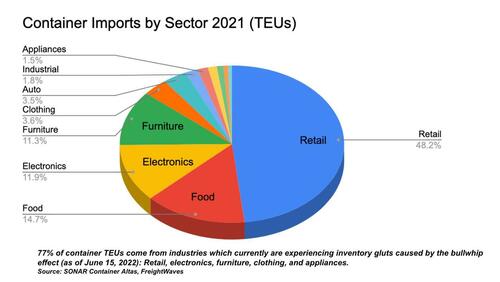 How the trucking turndown materialized

The trucking industry has been struggling since the first quarter. FreightWaves predicted that a freight recession was imminent, based on the drop in truckload volumes and tender rejections in the first quarter.

The SONAR Outbound Tender Volume Index (OTVI) measures truckload load requests from shippers to carriers, moving under contract rates. From the start of February to the end of March, it dropped by 12%.

The volume drop continued in April and May, with OTVI registering another 2.5% decline, but stabilized in June in conjunction with the summer construction, beverage, and produce shipping seasons. In June, the OTVI index registered an increase of 1%.

A stable June provided some confidence to carrier executives that the slowdown in the earlier part of the year was just a cooling of volumes from the inflated levels of the COVID economy.

Unfortunately, the optimism at the end of June was short-lived and proved to be an anomaly in a disappointing year.

The OTVI index dropped by 8% in the third quarter, with the majority of this drop  occurring in the last two weeks of September. The decline has continued into October, with OTVI dropping an additional 3%.

The reality of the market deterioration is starting to set in across all trucking fleets. During the publicly traded trucking companies’ third quarter conference calls executives talked about how muted they expected the peak to be.

Here were some of the notes (quotes and other market commentary) from the early earnings reports and calls from the trucking industry.

Knight-Swift – the largest truckload carrier in the U.S.

CFO Adam Miller: “It’s rare that you go into a fourth quarter and not see some type of seasonal uplift and projects and spot opportunities. Especially with companies of our scale, we typically get some of these large, kind of difficult projects to handle and they typically pay a premium; … none of that stuff materialized.”

CEO David Jackson: “Anecdotally, we hear from those that have receivables with small carriers, and it has turned ugly very, very quickly for them,” Jackson said. “The pressures just continue to mount. I wouldn’t be surprised if there aren’t many small carriers that were just holding out hope for a strong fourth quarter to bail them out of a tougher summer with no spot [freight].”

Landstar  – one of the largest truckload carriers, largely made up of a network of small franchise operators:

President and CEO Jim Gattoni on customer expectations: “Everybody’s [indicating a] flat to a soft, muted peak season. Since our July call, I would say things have clearly softened up compared to the anticipation of a better peak season.”

J.B. Hunt  – the largest surface transportation company in the U.S., with significant operations in intermodal, dedicated, truckload and brokerage:

CEO John Roberts: “Further evidence has presented itself over the course of the quarter that requires an increased level of caution and awareness on broader demand trends and economic activity.”

Head of intermodal Darren Field: “Peak season this year just doesn’t appear to be much of an event, although the company is taking market share.”

CEO David Parker: “As we look toward 2023, we anticipate a difficult freight environment coupled with cost inflation, which will pressure margins.”

Triumph Bank – one of the largest providers of banking, factoring, and payment services to the trucking industry:

CEO Aaron Graft on factoring (i.e., short-term trade finance): “The decline in freight rates is starting to show up at TBC. September’s gross revenue was $17.2 million, 8.2% less than a year ago. October is already tracking down 19% from a year ago.”

In the context of understanding the trucking calendar and sharp decline in container volumes, the slowdown makes sense. Retail has an outsized impact on the fourth quarter trucking market. Even in a good year, construction, agriculture, and beverage volumes slow down in the fourth quarter significantly. Retail becomes king.

Retailers have nearly all of the products they need in their distribution networks for the holidays (and then some), which means that there won’t be a lot of freight demand as we head into the last two months of the year.

In recent quarters, retailers have talked about how much inventory they are carrying. This holiday season, they will be focused on burning that inventory down – potentially through aggressive discounting and promotions.

As firms get more nervous about the broader economy heading into 2023, there is little incentive to replenish bloated inventories. This is bad news for most freight companies as they will find far fewer load opportunities.

While the timing of when the freight recession started will be hotly debated, carriers from the weakest spot participants to the best run are starting to realize that peak will be very weak.

To borrow a phrase from Mish Shedlock, author of the macro-economics blog, Mishtalk, whether we are in a recession or headed for one, the question is moot.