Ahead of today’s GDP print, economist consensus was that in the 3rd quarter, the US economy would grow if entirely on the back of net exports (or trade), and sure enough that’s precisely what happened. While the BEA reported that in the third quarter, US GDP rose 2.57%, more than the 2.4% consensus and up notably from last quarter’s -0.6% and the -1.6% drop in Q1…

But, again, it was all about trade…

Net exports contributed 2.77ppt to GDP growth, or more than 100% of the total, as the trade deficit receded in the third quarter.

… as the following breakdown shows: 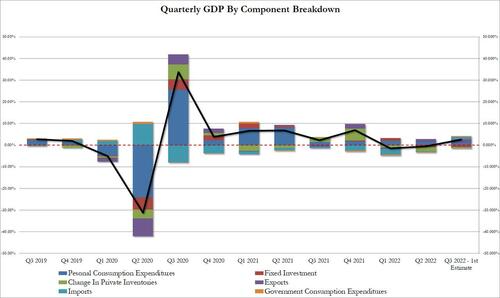 Commenting on the surge in trade, the BEA wrote that the increase in exports reflected both goods (led by industrial supplies and materials as well as nonautomotive capital goods) and services (led by “other” business services and travel). Some more details:

And while the headline GDP was generally in line with expectations, where the market was decidedly pleased was to learn that the GDP price index rose just 4.1%, well below the 5.3% expected, and down more than half from 9.0% last quarter.

Excluding food and energy, core PCE 4.5% after increasing 4.7%, in line with expectations. This was enough to whiplash the USD, which was spiking after the somewhat dovish ECB (having dropped the “next several meetings” language), and reverse some of its gains in what has so far been a very fast, nail-bitting session. 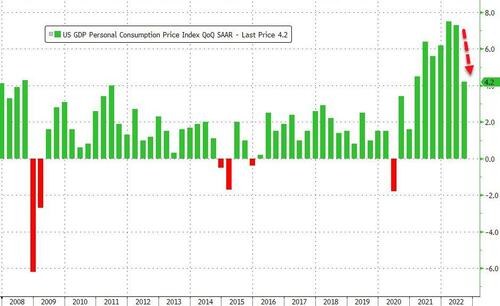 Today data, according to some such as the FT, “ends a debate that raged over the summer as to whether the US economy was already in a recession” although we disagree since the only reason the GDP print was strong is because Europe is collapsing into a recession and is now overly reliant on US energy and weapons exports; the GDP print also did little to dispel fears that the US will eventually (again) tip into an even bigger recession given the aggressive steps the US central bank is taking to stamp out elevated inflation.

Two consecutive quarters of shrinking GDP has long been considered a common criteria for a so-called “technical recession”. However, top policymakers in the Biden administration and at the Federal Reserve pushed back forcefully on that framing, citing ample evidence that the economy was still on firm footing. The Fed is poised early next month to deliver its fourth consecutive 0.75 percentage point interest rate increase, which will lift its benchmark policy rate to a new target range of 3.75 per cent to 4 per cent. As recently as March, the federal funds rate hovered near zero, making this tightening campaign one of the most aggressive in the US central bank’s history.

As of last month, most officials thought the fed funds rate would peak at 4.6%, but now investors expect it to close in on 5% next year (that said, today’s weaker than expected PCE print will likely ease those bets). Given how large an impact the Fed’s actions are expected to have on growth and the labour market, most economists now expect the unemployment rate to rise materially from its current level of 3.5 per cent and for the economy to tip into a recession next year.

Top officials in the Biden administration maintain that the US economy is strong enough to avoid that outcome, citing the resilience of the labor market, but even Jay Powell has acknowledged the odds have risen. “No one knows whether this process will lead to a recession or if so, how significant that recession would be,” he said at his last press conference in September.