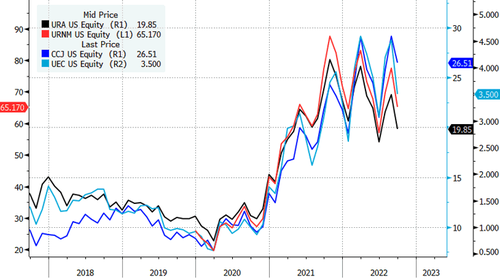 Our view from December 2020 was that sooner or later, nuclear would be included in the ESG basket (see “Is This The Beginning Of The Next ESG Craze“). There have been multiple signals from the US Energy Department to develop a domestic uranium strategy.

On Wednesday, Jennifer Granholm, the US energy secretary, gave even more clues about a domestic uranium strategy that would eventually eliminate the US reliance on Russia and its allies Kazakhstan and Uzbekistan for about 50% of its uranium needs, according to Reuters.

“The United States wants to be able to source its own fuel from ourselves and that’s why we are developing a uranium strategy,” Granholm told reporters at the International Atomic Energy Agency conference in Washington.

“We’ll be working on … enhancing that and making sure that we can fuel our own reactors as well as the partners to those who also have those ambitions,” she added.

In August, President Biden signed the Inflation Reduction Act, which helps pave the way for nuclear energy to reduce US emissions before the decade’s end.

Granholm said the White House will “seek an additional large amount by the year-end for a more fulsome strategy.”

The move by the Energy Department is to remove Russia’s critical leverage to throttle US nuclear power. There’s a big push to increase US mining and processing of uranium to ensure US energy security.

The broader Uranium space has been on an upswing for the last two years.

Like the US, other countries around the world, including Germany and Japan, are developing plans or implementing strategies to revamp their nuclear power plants after years of neglect. It seems like climate alarmist Greta Thunberg’s war against nuclear is finally being ignored.