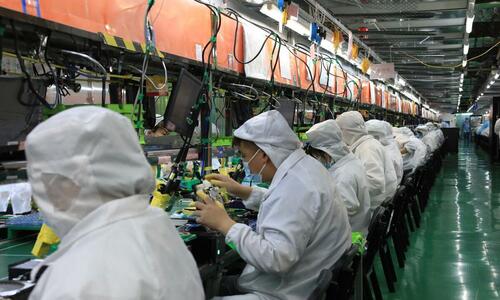 To say the working conditions at Apple’s largest iPhone plant probably aren’t incredible to begin with would likely be an understatement. But then when you lock down most of your 200,000 workers because of a Covid outbreak, those conditions likely get much worse.

This is what seemed to be the case this week, with Bloomberg reporting today that Covid cases at Foxconn Technology Group’s main factory in the central city of Zhengzhou have resulted in the facility going into a “closed loop” lockdown.

The lockdown means that employees can’t leave the campus and are tested regularly for Covid, the report says. But after the lockdown, “food has become a source of unrest”, according to the report. “Scuffles” have even broke out amongst employees over food.

As a result of the lockdowns, cafeterias at the manufacturing site were shut down and workers on assembly lines were given “meal boxes”. Some employees who have remained locked down in their dormitories were given items like bread and instant noodles.

The origins of Covid on the compound are unknown, but workers in numbers up to a dozen can share “cramped living quarters”, the report says. Bloomberg said that conflicting reports indicated that isolated workers may have been deprived of proper meals.

Recall, just days ago we wrote about Foxconn implementing health restrictions after a flare up of Covid.

Foxconn’s Zhengzhou campus has about 300,000 workers — all have been banned from eating in public and must take meals back to their dorms for consumption, the South China Morning Post reported days ago, citing a notice on the factory’s official WeChat account.

“Foxconn’s Zhengzhou workers are only permitted to commute along certain routes within the campus, with many entrances closed in a de facto lockdown,” SCMP said. In another notice, workers living off campus were advised to move into on-site dormitories.

At least for now, production of iPhones at the Zhengzhou campus remains normal despite the newly enacted Covid restrictions, according to a Foxconn spokesman.

“Production in the Zhengzhou campus remains normal, without a notable impact [from the Covid-19] situation,” the spokesman said.

China has yet to capitulate on its long-standing Zero-Covid policy (despite being a convenient scapegoat for Xi to deflect anger at the slowing economy during this month’s 20th party Congress). More than one million people were ordered to stay at home earlier this month in the metro area surrounding the iPhone campus.