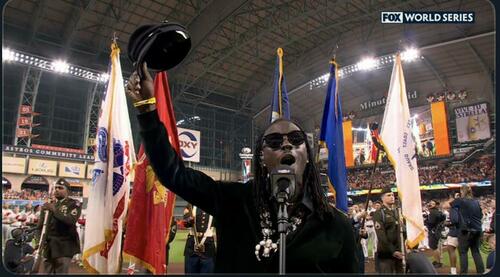 Friday night’s thriller of a World Series Game 1 started with a flurry of errors…by Grammy-nominated Black Pumas singer Eric Burton, who made a wreck of the national anthem by repeatedly botching the lyrics.

Someone tell Eric Burton to learn the lyrics to the National Anthem before you sing it before game 1 of the #WorldSeries
pic.twitter.com/kwPCnU6rs4

Burton’s bomb bursting on air likely gave at least a few fans of the host Houston Astros a jinxy feeling. Their worst fears would be realized over the ensuing game.

Things started out great for Houston, a team with a reputation permanently stained by a 2017-18 cheating scandal in which video cameras were used to steal opposing catchers’ signals, and the banging of trash cans — or silence — was used to tell Astros batters what pitch to expect.

The Astros, previously undefeated this postseason, rocketed out to a 5-0 lead over the Philadelphia Phillies in the third inning. At that point, ESPN’s analytics put the Astros’ win probability at 94%.

However, the scrappy sixth-seed Phillies, well-practiced at resolutely overcoming adversity, stormed back to tie the game in the fifth inning before scoring a winning sixth run in the 10th. The Phillies are now 4-0 in Game 1’s this postseason — with every one of those wins coming in hostile territory.

Next time, the Astros might want to provide their anthem singer with a teleprompter: That’s one kind of Houston cheating we’d all approve of.