Did NikiLeaks Just Kill The Dovish Fed Narrative He Launched 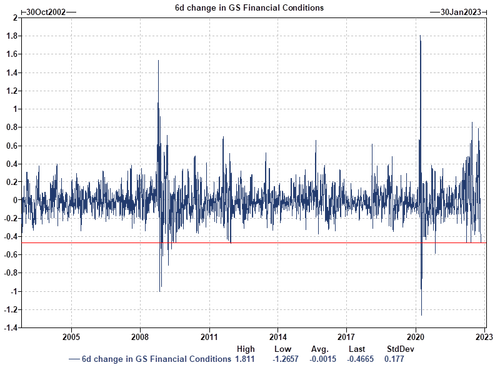 As Goldman’s Matt Fleury wrote earlier today, since Nick Timiraos, also known as NikiLeaks, tweeted that the Fed was going to slow its pace of hiking last Friday…

The Fed is barreling towards a fourth straight 75-basis-point rate rise at the November FOMC meeting.
⁰That meeting could serve as a critical staging ground for future plans, including whether and how to step down to 50 basis points in December https://t.co/vPMSXDjHL8

… we have had one of the largest bouts of financial conditions easing this century.

But, according to the Goldman trader, in the latest series of NikiLeaks tweets this morning, the WSJ’s Fed mouthpiece is seen as aggressively trying to dial that back ahead of the Fed’s meeting on Wednesday by suggesting that the US consumer is much stronger than otherwise perceived (this is dead wrong, of course, but as a reminder, this is all about setting up the narrative that contains the Fed’s reaction function):

“Consumers have a big cushion of savings. Corporations have lowered their debt-service costs. For the Fed, a more resilient private sector means that when it comes to rate rises, the peak or “terminal” policy rate may be higher than expected“ (Cash-Rich Consumers Could Mean Higher Interest Rates for Longer).

One measure of private sector balance sheets shows they are healthier than on the eve of any U.S. recession since the 1950s, according to Goldman Sachs pic.twitter.com/JP43dlbsNP

As Fleury adds, one particular comment in the WSJ article was “This is not the earnings season the [Fed] wanted to see” – indeed this slide from Unilever results this week highlights that corporations are pushing through price increases at increasing pace. 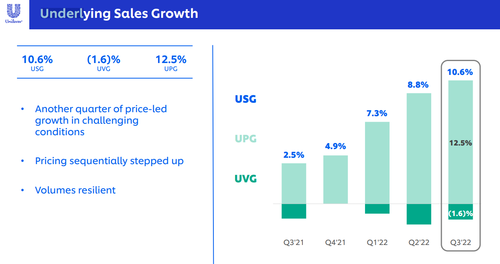 Incidentally, Goldman’s chief economist Jan Hatzius updated his Fed hike estimates yesterday heading into this week’s FOMC and adds a 25bp hike at the March meeting. Which simply means that he is now aligned with consensus. His note is available to pro subs in the usual place.

Finally, here is Nikileaks appearing on the Sunday morning circuit, with an even more vocal hawkish warning “Even though the risk of doing too much is a recession, the risk of not doing enough is that inflation just stays high and you have to have a bigger downturn later.”

Translation: those who think the Fed would not dare crash the market 6 days before the midterms may want to reassess.

The Federal Reserve can't risk not getting on top of inflation, The Wall Street Journal's Nick Timiraos says.

"Even though the risk of doing too much is a recession, the risk of not doing enough is that inflation just stays high and you have to have a bigger downturn later." pic.twitter.com/C4XTRysqWm