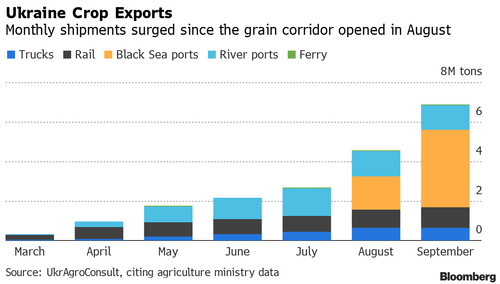 Moscow immediately suspended its compliance with the grain deal, known as the Black Sea Grain Initiative, which was formed and launched in July and ended a five-month Russian blockade of Ukraine’s ports. The United Nations and Turkey brokered the deal, allowing safe passage for cargo ships in and out of Ukraine’s ports to haul farm goods worldwide.

The deal was successful, as Bloomberg data shows Ukrainian exports via the Black Sea ramped after the agreement was signed in late summer.

But what the Russian Defense Ministry describes as a “massive” drone attack on the Black Sea Fleet in the Crimean port city of Sevastopol derailed all hopes of a continuation of the deal as Moscow pulled out.

Sernatinger is right. Wheat in Chicago jumped nearly 8% to $8.9325 a bushel Monday morning.

Andrey Sizov, a Russian grains analyst at SovEcon, told WSJ that many funds would have to buy into grain markets Monday to cover their positions. 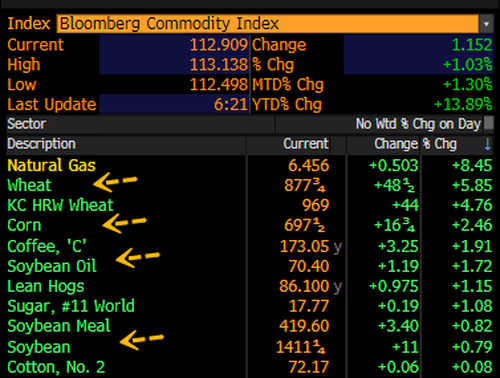 Meanwhile, a UN spokesman said Secretary-General António Guterres was attempting to reverse the Russian suspension. Also, the Turkish defense ministry was trying to rescue the deal, according to WSJ.

No grain shipments transited the Black Sea safety corridor for Sunday, though Turkey, Ukraine, and the UN agreed for 14 grain vessels to transit the Black Sea on Monday.

What’s difficult to forecast is just how much higher grain prices are headed if the safe-passage deal Russia guaranteed is suspended, with no plans by Moscow (thus far) to extend it. This may deepen the global food crisis and push tens of millions of people closer to starvation.

According to Joe Davis, director of commodity sales at Chicago-based brokerage Futures International LLC., he expects “the UN, with Ukraine and Turkey, will continue the grain deal despite Russia pulling out,” adding the wheat market will be volatile as traders closely watch Black Sea developments.

“You are going to be missing some grain on the world market from Ukraine … and no one is going to rely on getting it out of there if it’s not on the water already,” said Commonwealth Bank of Australia strategist Tobin Gorey. This means supplies will have to be sourced elsewhere.

All this comes as countries from Europe to the Middle East are short of food, fuel, and fertilizer.