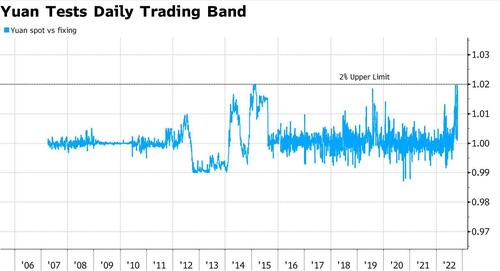 The People’s Bank of China has urged traders to respect its yuan fixing. Instead, they are testing the central bank’s resolution to defend the currency by pushing the yuan toward the limit of its trading band.

The longer the deviation between the market and the PBOC’s reference rates persist, the more likely it will end in a volatile showdown.

Recent data show continued weakness in economic fundamentals for the yuan. Both manufacturing and service sectors contracted. Outflows from the bond market continued. And Covid cases are spreading again.

Against this backdrop, it’s not surprising to see the yuan under pressure. One-month implied volatility has hit a record since the offshore market came into existence in 2011. The volatility curve is inverted, with short-term vol higher than one-year vol, in a sign of market stress.

On Monday, the yuan traded about 1.8% weaker than the fixing, marking the third time over the past five weeks that the spot rate was so close to the 2% daily limit. The currency has never tested the trading band so often since China revamped the fixing mechanism in 2015.

And it’s not only against the dollar. The yuan’s weakness is broadening. The CFETS yuan basket fell below 100 for the first time since November 2021. On a trade-weighted basis, the divergence between the market and the official reference rate reached a record 1.8% on Oct. 25, according to Bank of America’s calculation.

In September, when the spot yuan traded close to the daily limit, the PBOC issued a strongly-worded statement saying that speculators will lose money and called for market participants to “protect the authority of the fixing.”

These warnings have fallen on deaf ears. That shows “the credibility of the CNY regime is being tested,” Bank of America’s strategists, including Claudio Piron, wrote in a note Monday.

In early 2015, the PBOC kept the yuan steady even as the spot rate started to weaken toward the edge of the trading band. The divergence was eventually resolved when the PBOC engineered a one-off devaluation in August of that year.

The central bank is facing a similar dilemma. Either it forces the market to converge to a stronger level to reinforce its authority, or it allows the market to guide the yuan to a lower level. Either way, there’s likely to be more volatility ahead.