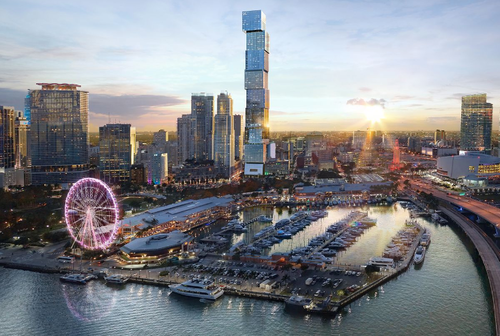 By the end of this decade, if everything goes to plan, Miami will have a new supertall tower, measuring more than 1,000 feet tall, able to withstand hurricane-force winds.

PMG, which is developing the Waldorf tower, said the structure had overcome many designing and planning challenges, such as how to engineer a foundation in porous limestone, survive hurricane-force winds, and obtain permission from Miami International Airport to build a supertall building in the middle of a highly traveled flight path.

One of the engineering marvels PMG worked into the tower’s design is a pendulum at the top that counteracts swaying in high winds. There are also plans to use specialized technology called deep soil mixing to create a sturdy foundation.

“Where other buildings might have taken four months of foundation, it’s going to take us a year to get all that structure underground just to support this building,” PMG chief executive Kevin Maloney said.

“The building code in Miami is the strictest in the country, and that’s true about 1,000-foot towers or eight-story towers.

“There’s not a city I feel safer in than Miami in terms of hurricane code,” Ryan Shear, Managing Partner of PMG, said.

Maloney said 87% of the condo space in the supertall tower has already been sold, with units starting at $2 million.

High demand for the future tower could be due to the massive influx of people and new money flooding into Miami. There are financial moguls, such as billionaire Ken Griffin moving the global headquarters of his Citadel and Citadel Securities to the city from Chicago.

The financial winds are shifting, and in no time, the streets of Brickell will be filled with portfolio managers and programmers.

Miami is the next Wall Street. We doubt Waldorf tower will be the only one by the decade’s end.