October Market Lows And The End Of Bear Markets 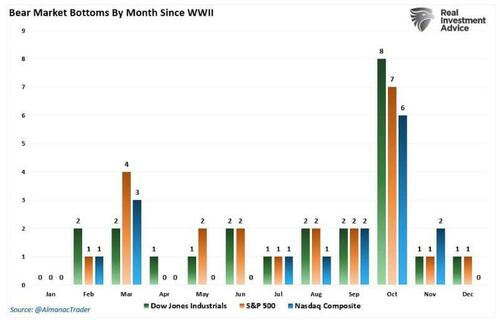 October started strong and then slid to new lows but managed to rally back toward the month’s end. As noted in “As Buybacks Return:”

With those gains, it was not surprising to see articles flipping bullish. To wit:

“Here’s a little news flash. Tech stocks have entered a brand-new bull market that could be the start of a massive 50%-plus melt-up. And certain tech plays could see a 10X surge higher!“

The honest answer is no one knows for sure. However, as Yahoo Finance recently noted, October market lows did historically mark the end of bear markets more often than not.

“Not all indices have bottomed on the same day for all bear markets, but the lion’s share, or bear’s share I should say, bottomed in October.”

October market lows have also occurred regularly before a midterm election, such as in 2022. As Deutsche Bank recently observed:

“The S&P 500 has risen in the year after every single one of the 19 midterm elections since World War II, with not a single instance seeing a negative return.”

However, while there is undoubtedly historical precedent to suggest October market lows may be in, it is crucial to remember there are “no sure things” in the financial markets. ‌

“History is a great guide, but it’s not gospel.” – Sam Stovall

The Lows Are Likely Not In

After ten months of a brutal grind lower in the markets, it is no wonder why investors are looking for any sign the selling may be over. As Bob Farrell once quipped:

There is little doubt as to the veracity of that statement. However, while we can certainly hope that the October market lows marked the bottom, there are reasons to expect such is not the case. At least not yet.

While the mainstream media continues to define the current decline as a “bear market,” it remains a “correction” within the bullish trend. Several reasons for that statement will determine whether the October market lows were just that. 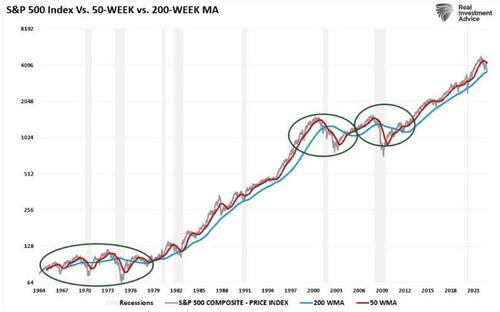 Most notably, many factors are currently missing that coincided with each previous bear market cycle.

Further to this point, BofA recently published a checklist of “signposts” that previously signaled bear market lows. Currently, only 2 of the 10-signposts are registered.

While the market will likely have a sustained rally from the recent October market lows, it is probably not the bottom of the bear market. In fact, there a numerous reasons to suspect that lower market lows are coming in 2023.

As we move into 2023, the markets will have much to contend with. With valuations still elevated by many measures, earnings are weakening, and profit margins under pressure from inflation, a repricing risk of equities remains. Investors should remain cautious until the economy shows signs of improvement. Notably, markets tend to bottom and recover before the economic data, which is why it tends to be a leading indicator of economic activity. However, the risk to investors in 2023 is an economic recession, which is most likely not accounted for currently.

As we have noted previously, each increase in the Fed funds rate takes between 9 and 12 months to impact the economy. At the same time, the economy is already slowing, and assuming the Fed hikes to its predicted target, that 4% increase in rates has yet to impact growth. If such is the case, earnings growth will slow considerably more. 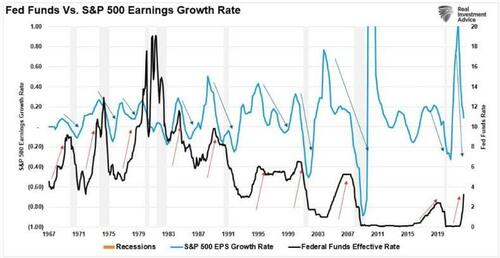 But critically, the Fed is not operating in a vacuum. Accompanying that surge in the dollar was the sharpest increase in interest rates in history. Sharp increases in interest rates, particularly in a heavily indebted economy, are problematic as debt servicing requirements and borrowing costs surge. Interest rates alone can destabilize an economy, but when combined with a surging dollar and inflation, the risks of market instability increase markedly. 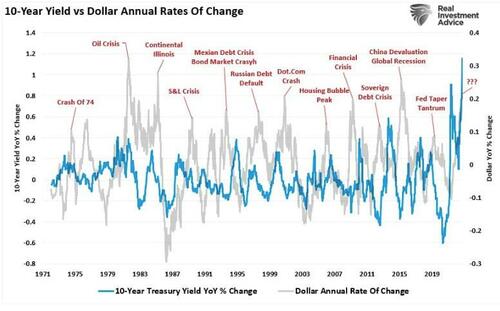 We suspect that the risk of a recession in 2023 is substantially higher than most economists expect. Such is particularly the case when the lag effect of monetary policy collides with economic weakness from reduced consumer demand.

Navigating What Comes Next

As noted, the biggest problem of investing during a recession is knowing that you are in one. Many indicators suggest we could be heading into a recession next year, but unfortunately, we won’t know for sure until after the fact.

Therefore, we must respond to market warnings and take action to prepare for a recession in advance. That said, the most important thing isn’t necessarily what steps to take but what behaviors to avoid. During market downturns, our emotional and behavioral biases tend to inflict the most damage on our financial outcomes.

“Loss aversion” is one of the leading factors influencing investment decisions, according to a recent survey from the CFA Institute. 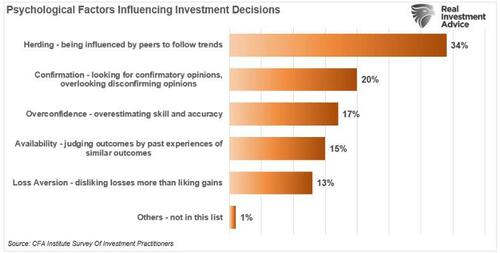 “Loss aversion is a tendency in behavioral finance where investors are so fearful of losses that they focus on trying to avoid a loss more so than on making gains. The more one experiences losses, the more likely they are to become prone to loss aversion.” – Corporate Finance Institute

Therefore, to avoid losing money in a recession, you must:

I agree with Motley Fool’s conclusion:

“The bottom line is that, during recessions, it’s important to stay the course. It becomes a bit more important to focus on top-quality companies in turbulent times, but, for the most part, you should approach investing in a recession in the same manner you would approach investing any other time. Buy high-quality companies or funds and hold on to them for as long as they stay that way.”

Most importantly, you must know the difference between a “top-quality” company and one that isn’t.