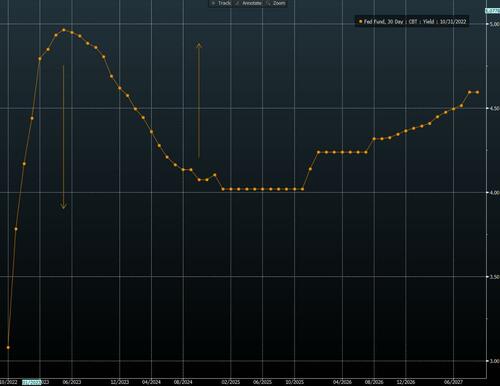 Stocks will be stuck in a bear market for several more months even with a peak in Fed hawkishness.

Peak global inflation is likely here, allowing global central banks, including the Fed, to begin a gradual tempering of their hawkishness. The Fed will announce Wednesday the outcome of its rate-setting meeting, with a 75 bps hike expected. (To be clear, even while global inflation may have peaked, there are likely still several countries that will see another inflation peak later in this cycle.)

This might be taken as an all-clear for stocks and a swift end to the bear market, but current formidable headwinds and history suggest otherwise.

First, a distinction needs to be made between peak Fed hawkishness and the Fed pivot. A peak in hawkishness does not mean an immediate flip-flop to dovishness. Instead, it means the peak Fed Funds rate should stop rising – which we have seen – and be maintained. As the market starts to price this in, the front of the very steep Fed Funds curve should flatten, and the back of the curve – where the pivot is – should disinvert, taking the pivot out.

The negative correlation between the front and the back of the Fed Funds curve – pivoting around the peak in the Fed Funds rate – is very unusual. The last time was during the aggressive Fed hiking cycle in 1994, and then in again in the late 1990s. 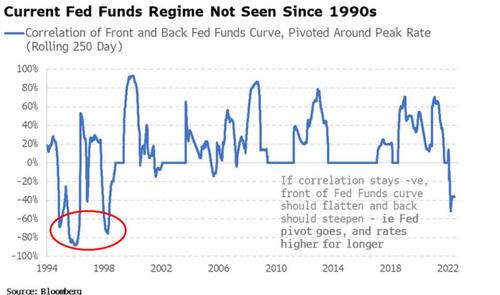 The pricing out of the Fed pivot has implications for volatility as the relative price of crash insurance has a strong relationship with expected Fed cuts. No pivot likely means more expensive out-of-the-money S&P puts, and hence a higher VIX.

The end of the 1994 rate-hike cycle set the stage for a multi-year equity rally into the tech bubble. However, that is not the typical case. In median terms, the S&P moves sideways for about six months after the last Fed hike before putting in a pronounced rally. 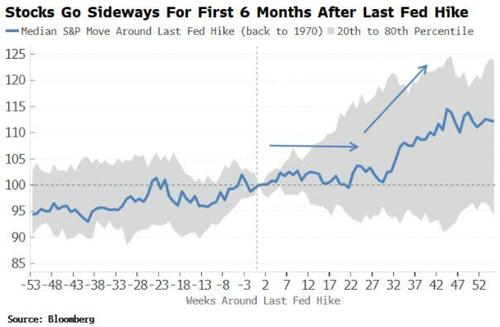 Given we likely have three (perhaps more) rate moves to go before the Fed pauses – along with an increasingly likely earnings recession – any sustainable rally in equities and an end to the bear market is a way off.