Peter Schiff: Stocks Are Priced For Perfection In An Imperfect World 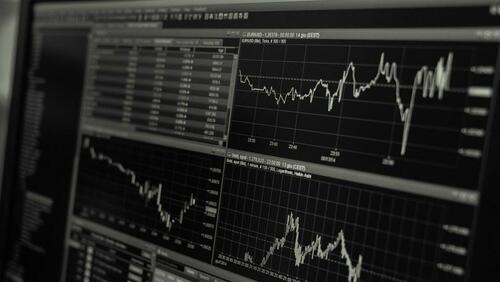 Despite all kinds of economic bad news, as of Friday, the Dow Jones was on pace for the best October in history. As Peter Schiff explained in his podcast, this demonstrates the fact that for now, bad news is good news, and stocks are priced for perfection in an imperfect world.

Over the past month, we saw more air come out of the housing bubble, PMI dip deeper into contraction, along with other signs of a deteriorating economy. Even the positive growth GDP print wasn’t really good news. But the markets shrugged it all off. As of Friday, Oct. 28, the Dow was up 14.4% on the month.

He also noted that the rotation from growth to value stocks continued. This is evidenced by the losses in the NASDAQ.

Investors are moving out of hype and momentum into real value, into real dividends. And why is that happening? That is because interest rates have moved up, and so, we’re no longer pricing stocks based on a fantasy. Plus, we now have a cost of capital. There is an interest rate with which to discount future earnings.”

Peter said he thinks we’re just at the beginning of this rotation. In fact, it could last the rest of this decade. That means the indices heavy with momentum-oriented stocks have a long way to decline.

To show just how elevated markets are, Peter went back to 1995 and found the average price-to-earnings (before taxes) was 14.1. The current ratio is 19.6.

So, in order for the market to return to the normal ratio, we need another 28% decline from here. Not from the highs, but from where we are right now.”

Peter said the only way you can justify a market this expensive is if interest rates go back down.

If interest rates stay where they are, or continue to move higher, which the Fed is promising, the markets have a long way to fall to get back to normal.

But there is no reason why the markets should be priced at a normal valuation given the adverse circumstances that are now taking place. We have the highest inflation in 40 years, maybe the highest inflation ever. The Fed has a monumental task in front of it if it’s actually going to deliver on its promise to bring inflation down to 2%. So, if you believe the Fed – that they’re every bit as resolute in their commitment to bring inflation back down to 2%, and they’re going to do whatever it takes to achieve the goal, then you have to concede that the market is not going to fall to normal valuation, but a below normal valuation.”

Think about it. At times since 1995, these metrics have been lower than average. Why? Because during those times the markets were facing adverse circumstances.

Well, I can’t think of more adverse circumstances than the ones that the markets are operating under right now.”

So, we should see a market getting cheaper compared to those historical averages.

But not only is the market not cheap, not only is it not averagely or fairly valued, but it is still extremely expensive. So, we have a market priced for perfection and we have anything but perfection in the current circumstances.”

Peter said this tells him investors still don’t believe the Fed. Or they believe that the Fed will be able to quickly bring inflation back down to 2%, and then it will be able to return rates back to artificially low levels.

Because without 0% interest rates and QE, there is no way to justify the current valuation of today’s market. But if investors believe that, they are wrong.”

Peter said the Fed isn’t going to get inflation anywhere near 2%. And even if the Fed did manage to pull that off, it wouldn’t be able to return to abnormally low interest rates without inflation quickly spiking again.

Neither of those outcomes is possible. The only way the market could be correct in attributing these high valuations to today’s market is is if I’m right about what happens – that the Fed pivots and gives up the fight against inflation even though inflation never returns to 2%.”

Peter recently said it looks like the Fed has already made a “soft” pivot.

He said even under the environment he envisions, price-to-earnings ratios will still come down.

The only way to justify the current level is if the Fed is able to return to those artificially low interest rates and QE, and inflation goes back down to 2% and stays there. But as I said, that is impossible. So, there is no actual way that you could justify the current valuation of the US market. So, the actual valuation have to come down.”

In this podcast, Peter also talked about Amazon, Apple and Netflix’s disappointing earnings reports, Meta and Alphabet’s pain as advertising money dries up, the need for consumers to save no and buy later, and Elon Musk’s Twitter purchase.