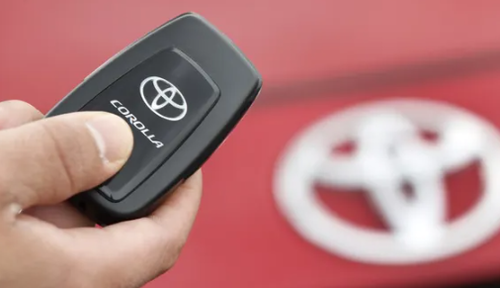 Toyota is still struggling so badly to get its hands on semiconductor chips that it is now limiting “smart” keys to one per car in Japan.

The company said in a statement late last week: “As the shortage of semiconductors continues, this is a provisional measure aimed at delivering cars to customers as quickly as possible. As for the second smart key, we plan to hand it over as soon as it is ready.”

The change is going to affect 14 different Toyota models sold in Japan, according to Fox News.

“Due to supply chain delays, Toyota will temporarily provide one smart key for certain vehicles produced in North America. Our manufacturing, logistics and sales teams are working diligently to develop countermeasures to minimize impact to customers,” Toyota said in an emailed statement to Fox.

The company has been lamenting “the tight supply-demand balance for semiconductors and other factors” which it says has slowed down its sales globally. Despite the overall slowdown, the company is seeing some signs of promise in Asia.

“However, a rebound from the impact of parts supply shortages due to the spread of COVID-19 in Southeast Asia in the previous year resulted in a year-on-year increase in global production,” Toyota said.

“The situation remains difficult to predict due to semiconductor shortages and COVID-19. However, we will continue to carefully monitor the parts supply situation and minimize sudden decreases in production as much as possible while making every effort to deliver as many vehicles to our customers at the earliest date.”

However, the change may not last long. We reported just days ago that the shortage of semiconductors of days past has all of a sudden turned into a glut of inventory.

Names like Taiwan Semiconductor Manufacturing Co (TSMC), Advanced Micro Devices Inc (AMD) and Nvidia are now dealing with “unsold stockpiles” of inventory as a result of shrinking demand and cancelled orders, according to a new report by Caixin.

Xie Ruifeng from semiconductor industry market research institute ICwise told Caixin: “This round of business sentiment is reversing so fast that chip designers were struggling to find production capacity only last year, but now they find chips won’t sell.”

And names like AMD and Intel are also suffering the demand slowdown:

In the first half of 2022, macroeconomic headwinds and a number of “black swan” factors combined to cause consumer electronics demand to plummet, with smartphones and PCs bearing the brunt. Micron predicted that global PC shipments will decline by 10 per cent to 20 per cent in 2022, while the global smartphone market will decline by less than 10 per cent.

And manufacturers are dealing with “six months of stockpiles” that they built up as a result of 2021’s shortage…and once-optimistic demand forecasts. That was, of course, at a time when free money was being handed out to “combat” the pandemic. Now, with tighter monetary policy globally, it should be no surprise that demand is falling off.