Markets Could Be A Trap Ahead Of Today’s Fed Decision 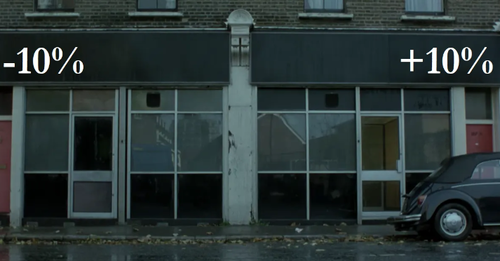 Make no doubt about it, all eyes are going to be on the Federal Reserve’s decision about interest rates later today – and most strategists feel as though they have the market action pinned down. If, of course, by pinned down, you mean “could land anywhere within a 10% range”.

For example, J.P. Morgan recently offered up a ludicrously detailed and nuanced take on what the day’s action could hold, broken down into 6 different situational scenarios of different rate hikes and commentary choices, all of which basically boiled down to the grand conclusion that “markets could crash lower or rip higher 10% depending on what the Fed does.”

To quote Snatch, “You could land a jumbo f*cking jet” in that range.

My analysis looks past that brilliant work of sell-side art and makes the case for how, in my opinion, the Fed has already “booby trapped” markets ahead of their decision today. Let’s discuss what I think.

The nice thing about today’s decision is, in my opinion, it doesn’t matter.

But I still continue to believe that a trapdoor could fall out from under this market at some point regardless of what the Fed says or does today.

My readers know that for the last few months, I have been making the argument that the 325 basis points already baked into the economic cake have still not been digested, and subsequently puked up, by the market yet. 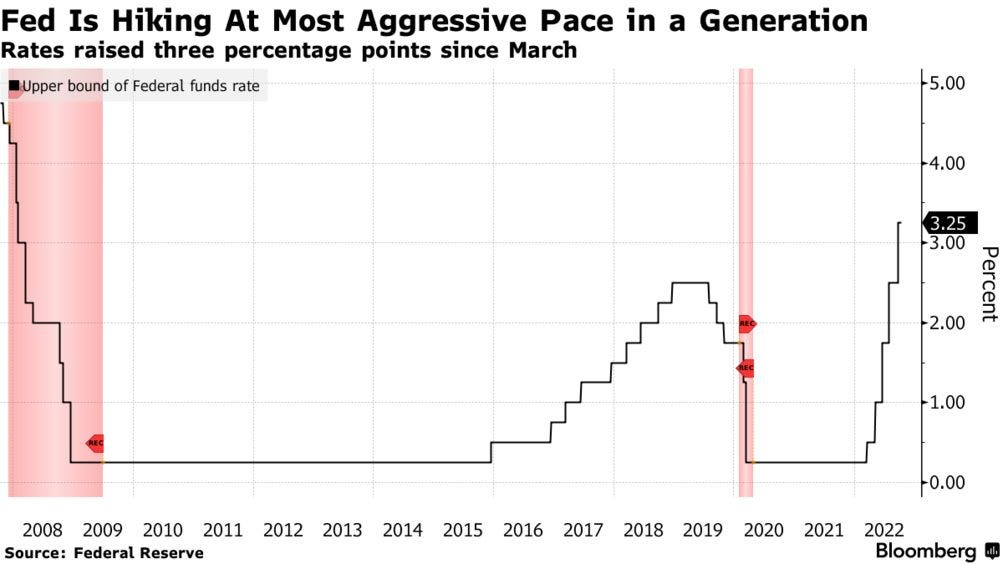 And the consumer is just now starting to run out of firepower. Have a look at an extremely frightening chart: personal savings rate overlapped with consumer loans.

As Americans are now tapped out on their savings, they are borrowing. When less borrowing becomes available and rates rise, it then becomes a story of delinquencies, charge off, bankruptcies and forced selling. When forced selling happens, prices are driven lower, making the cycle even worse for remaining participants. Thus begins a financial royal fuck deluxe that ends in capitulation and panic – the first semblance of true free market buy signals the market will have given off in years.

If I had to guess, we’re at the “Return to ‘Normal’” phase of things. After all, Goldman put out a note last week suggesting a soft landing could be incoming and people think they’re “buying the dip” with valuations nearly double the median S&P 500 bear market P/E ratio right now.

We blew past “Delusion” during Covid, when we didn’t even have an economy and were relying totally on the Fed’s money printer (which we are now paying for with 8% inflation) and we reached “New Paradigm” once Cathie Wood and Ross Gerber were being hailed as generational investing visionaries. 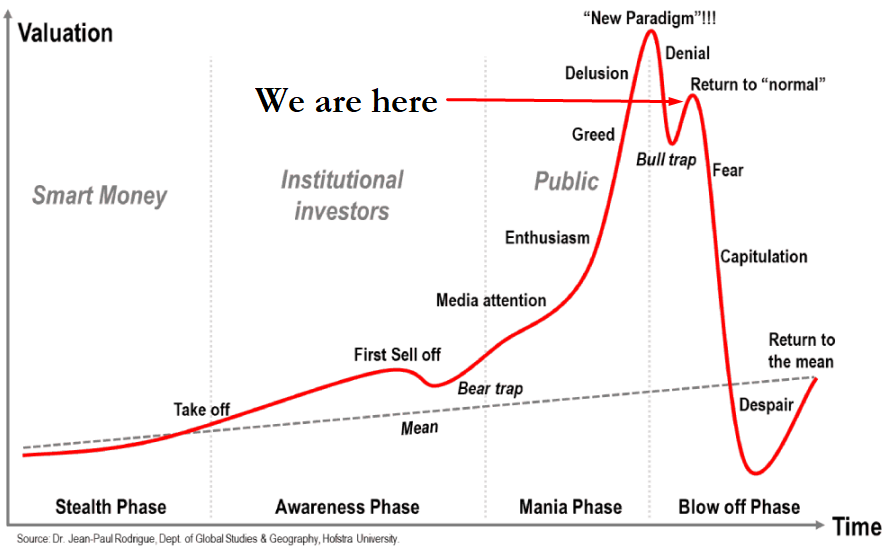 We spent the summer in “Denial”, as markets tried to recover, and now that things have settled down slightly, some people think we are back to normal. We’re not.

You can call me a pessimist if you’d like, but it is still extremely difficult for me to make the case that the market has bottomed – even if the Fed pivots today – with Market Cap/GDP about 40% above historical means and a Shiller PE in the mid 20’s.

Make no mistake about it, now matter how many times your portfolio has caused you to wet yourself over the last 9 months, this has been an orderly selloff: we have not seen panic yet, these are not trying times, there is no blood in the street and there definitely isn’t a buffet of value across markets yet.

That’s not to say that those moments won’t be forthcoming, but the road to get there, in my opinion, remains a rocky one. We’re going to need to see significant panic, fear, and capitulation before “old-school” value investors like myself see a reason to get screamingly bullish on equities.

This time and place varies significantly from the last time I was overall bullish on equities, which was in March 2020. Back then, I knew stocks were still expensive even thought they had crashed as a result of Covid. But I also thought that Covid fears in general were overblown (especially regarding financial stocks) and that QE infinity would eventually lead to market euphoria when coupled with the rosier reality of the coming pandemic.

This go-round, it’s a little different. Rising rates are a far more concrete and finite problem. In essence, no matter what the Fed does now, 325 bps are already making their way through the plumbing of the market – a time bomb just waiting for the right reason to explode, in my opinion.

This perspective is extremely important: these rates are going to rise again today no matter what. The only thing “analysts” are considering is whether it’ll be 50 bps or 75 bps – to which I say: who cares? The 325 bps time bomb is still making its way through market plumbing regardless of whether or not the Fed doesn’t even hike at all today.

When it blows, we’ll realize we’re not on a path that the Fed set with today’s rate hike decision, but rather that all along we have been on a path they started us on 9 months ago when stimulus checks stopped, inflation became real, and the fallacy of 0% rates forever ended violently. We just closed our eyes and continued on the ride, never once pulling up the window shade to catch a glimpse of the Fed napalming the economy in the background. As long as the plane has stayed somewhat level, with tolerable amounts of turbulence, we have just assumed that everything is going according to plan. My guess is when the market pulls the window shade up for us, we’re not going to like what we see.