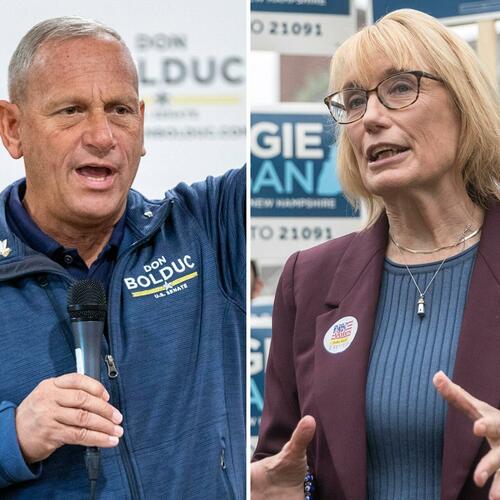 It looks like “Red Wave” in the the 2022 midterm may crest even higher, as the New Hampshire senate race is now tilting toward the GOP in what would be another flip of a currently Democratic seat.

A multi-week narrowing of a 9-point lead held by incumbent Maggie Hassan has culminated in a brand new St. Anselm College poll that puts Republican challenger Don Bolduc up by a percentage point. That’s within the poll’s 2.5% margin of error — but who knows the extent to which, like other polls, it understates GOP strength.

Chalk up the shift to Bolduc winning over more independents, who comprise about 40% of the electorate:

“Hassan’s lead among undeclared voters has evaporated,” reports St. Anselm’s pollsters. “After leading by 8 points (49%-41%) among undeclareds in September, Hassan is now tied with Bolduc at 45%.”

Bolduc’s favorability rating has risen from 41% to 46%, putting him just ahead of Hassan, whose favorability has sagged. Asked about Bolduc’s surge on Tuesday, Hassan said, “We’ve always known it would be a very, very tight race.”

Hassan, a former New Hampshire state legislator and governor, is in her first term in the US Senate. Bolduc is a retired US Army brigadier general who spent most of his career in Special Forces, surviving both a helicopter crash and a 2,000-pound bomb in a friendly fire incident. He has acknowledged having coped with post-traumatic stress disorder.

According to The Hill, Bolduc had struggled to convince Republicans to coalesce around his candidacy, as he’d faced controversy over previously claiming that the 2020 election was stolen from Donald Trump. As he’s backed away from that rhetoric, his fortunes have risen, putting him on the threshold of victory.

On Monday, Bolduc received Trump’s endorsement via the former president’s account on his Truth Social platform. Trump couldn’t resist including a scolding of his endorsee:

“General Don Bolduc has run a great campaign to be the U.S. Senator from the beautiful State of New Hampshire. He was a strong and proud ‘Election Denier,’ a big reason that he won the Nomination, but he then disavowed.”

Because of the swing in the New Hampshire race, RealClear Politics is now projecting that Republicans will control 54 seats in January, holding on to all their current seats while flipping seats in Arizona, Georgia, New Hampshire and Nevada.

As has been the case with Republican challenger Blake Masters in the Arizona Senate race, national GOP organizations dialed back their spending on the New Hampshire race when Bolduc was trailing by a significant margin, only for Bolduc to battle back into contention anyway. He’s done so while emphasizing energy policy and southern border security.

Bolduc has opposed Washington’s relentless infusion of weapons and billions of dollars into Ukraine without any accompanying pursuit of diplomacy.

Former Democrat and fellow veteran Tulsi Gabbard has campaigned for Bolduc, and recently penned an endorsement op-ed at Fox News:

“Having both seen the cost of war firsthand, we understand the importance of peace, and how essential and urgent it is that we stop spending taxpayer dollars to escalate the proxy war against Russia in Ukraine, walk us back from the brink of nuclear war, and support a negotiated end to this disastrous war.”