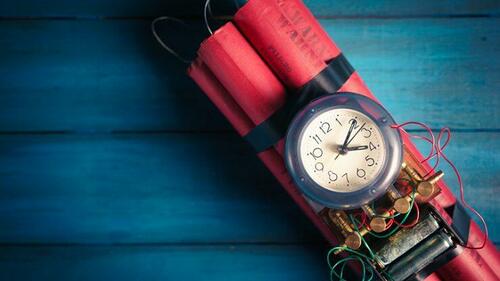 Not more than a year ago it was generally thought impossible among mainstream economists and retail investors that the Federal Reserve would commit to raising interest rates and ending stimulus.  After 14 years of predictable QE and near zero rates, it’s not surprising that they would refuse to acknowledge the possibility that the Fed would abandon them.  Well, as with the seasons, all things must change.

At first they refused to admit that inflation was a problem, now mainstream outlets are openly discussing the idea that the Fed will have to “blow up the economy” in order to stop rising prices, with another 75 bps rate hike expected this week.  As CNN noted recently in an article titled The Fed May Have To Blow Up The Economy To Get Inflation under Control:

“It’s unclear what all this tightening will do to the economy. The housing market is already starting to show some signs of strain. Bond yields have spiked due to the Fed. And mortgage rates, which tend to move in tandem with the benchmark 10-year Treasury, have skyrocketed this year as a result.

There is also a growing chorus of lawmakers on Capitol Hill who are warning Fed Chair Jerome Powell and other Fed members to slow down the rate hikes because they fear even tighter monetary policy will lead to a recession.”

In the past, the immediate reaction by media pundits would be to suggest that a Fed “pivot” to stimulus was coming soon.  This is no longer suggested and the economists are now accepting the reality that pivot hopes are fading.

As as new Slate article admits:

“…Some economists think it’s almost impossible for the Fed to be too hawkish right now. If people believe that the Fed will do whatever it takes to get inflation down—including making unemployment rise—that will shift public expectations in a way that actually helps keep inflation down. Paradoxically, that could reduce the amount of tightening the Fed ultimately needs to do and spare us additional economic pain.”

The narrative shift is dramatic, and it’s almost as if the media is now preparing markets as well as the public for tightening to continue for far longer than they initially expected.  But why the sudden change in tone?

From 1972 to 1980 the US witnessed a stagflationary avalanche that resulted in the Fed eventually raising interests rates to 20%.  This led to the recession of 1981-1982 and an unemployment rate of around 11%.  The effects of the recession persisted through the rest of that decade.

At that time, the stagflation crisis was triggered primarily by the complete removal of the US dollar from the gold standard by Richard Nixon and the Fed.  The Fed claimed that the move was designed to “stop inflation”, which makes little sense given that removing all commodity backing to the dollar resulted in a historic stagflationary crisis only a few years later.

It’s important to note that in the 1980s the country had not just witnessed tens of trillions of dollars in fiat stimulus created by the central bank on top of a doubling of the national debt in the span of eight years.  In other words, the economic conditions today are much worse than they were back then.

Another event in which the Fed raised interest rates aggressively into economic weakness was in the early years of the Great Depression, which Milton Friedman argued was the actual cause of the long term crisis.  In 2002, Ben Bernanke agreed with him.

The point is, the Fed has done all of this before and it has no reluctance about engineering a recession or even a depression in the face of inflation.  The greater threat, though, is that none of these measures will actually create stability.  Rather, they may only lead to greater instability given the unprecedented factors involved.  Furthermore, the media either doesn’t understand or doesn’t want to talk about the Fed’s culpability for the existing crisis.

For now, they are presenting inflation as a consumer “demand issue”, which is only a side note to the bigger issue of central bank fiat money creation.  It should not be forgotten that the Fed dumped over $8 trillion on the economy in the span of two years through covid stimulus measures, and this is when prices truly skyrocketed.  That was the straw that broke the camel’s back.

How many more rate hikes will it take to deal with that level of monetary inflation?  We have no idea because such a thing has never happened in the US before.  With the latest GDP print coming in at 2.6%  and CPI prints remaining high, there is no indication that tightening will stop anytime soon.  The implication is that a far reaching deflationary effort would be required, and the Catch-22 is that this effort could cause the same kind of chaos as inflation would.