The Return Of Tunisia’s Police State 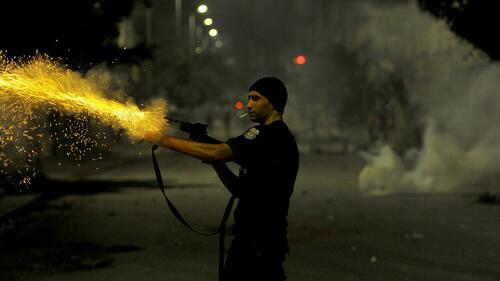 By Alessandra Bajec of The New Arab

Protests erupted on 14 October across several working-class districts in the Tunisian capital following the death of a young man, Malek Slimi, who suffered severe injuries from a fall during a police chase in late August.

The demonstrations in the deprived Ettadhamen neighbourhood, where the 24-year-old was originally from, saw youths chanting slogans against the police and throwing stones at them amid outrage over the violence which they say led to Slimi’s death. Tunisia’s interior ministry has denied allegations of abuse.

Protesters and police clashed for a week, with young demonstrators setting rubber tires on fire and blocking roads, while security forces reportedly responded with the extensive use of tear gas and sound bombs to disperse the crowds. The clashes resulted in some 30 people being arrested.

Ghaylen Jlassi, a member of the Tunisian Intersection Association for Rights and Freedoms (IARF) who documented some of the recent protests in the Ettadhamen and Sidi Hassine districts, estimated that up to 50 youths aged between 18 and 25 had been detained. More than half have since been released thanks to the work of lawyers and human rights organisations.

As part of the arrest campaign, Fourat Ayari, an eyewitness to Slimi’s death, was said to have been abducted for a day by police for questioning at the beginning of last week. Activist Saif Ayadi was rounded up by plainclothes police officers after a press conference about the ‘Learn to swim’ campaign against impunity on Wednesday last week and freed three days later.

An active member of the Tunisian League for Human Rights (LTDH), he was the first to visit the family of the deceased and to speak to Ayari. Aw Saadi, an activist with Damj (the Tunisian Association for Justice and Equality), was also released alongside Ayadi.

“Tunisian youth and civil society have been demanding an end to impunity for the country’s security apparatus for years,” Nessryne Jelalia, former director of Al Bawsala, a Tunisian NGO promoting democracy and human rights, told The New Arab. “I’m surprised that these young people haven’t turned more radicalised,” she added.

“Clearly, all popular discontent has been handled with a heavy-handed security approach under the current regime just like under any of the preceding governments,” the prominent civil society activist said. “The police state has never gone, it has just been operating at different degrees over the past decade”.

Citing data gathered by Tunis-based independent media collective Inkyfada, she said that a total of 28 cases of police violence in which Tunisians have lost their lives have been identified since 2011, without those responsible being held accountable. IARF puts the number at 30 documented cases, including that of Malek Slimi.

The deaths have occurred during the dispersal of demonstrations, at police stations, during police pursuits, and during arrests or while under detention.

In the aftermath of the recent demonstrations, the LTDH urged the Interior Minister “to stop the use of force” against peaceful demonstrators and to prosecute the assailants to ensure accountability.

t also stressed the need to release all of those arrested. The rights group rebuffed “any unfounded legal proceedings” used against them, in particular regarding the charges of damaging private and public property or attacking police officers.

Numerous civil society groups, lawyers, and human rights defenders have condemned the use of the police and the judiciary to crack down on anti-government protests.

The Office of the UN High Commissioner for Human Rights expressed concern about allegations of the “disproportionate use of police force to disperse recent protests”, urging authorities to respect freedom of expression and peaceful assembly.

The latest wave of anti-police unrest comes amid growing public anger over economic deterioration, injustice, and oppression. Opposition groups staged separate rallies on 15 October in central Tunis against President Kais Saied, who they blame for a crippling economic crisis including food shortages and inflation.

Adding to the widespread frustration among the population was a migrant tragedy in the coastal city of Zarzis, where authorities reportedly buried some of the bodies of drowned Tunisian migrants without attempting to identify them in a show of perceived carelessness.

Two weeks ago, six young men from Mornag, on the outskirts of Tunis, were sentenced to three years in prison for taking part in night protests in their neighbourhood in late September following the suicide of a young street vendor after municipal police seized his weighing scale. Around the same time, people were also protesting against high prices and food shortages in different areas of the capital.

The recent youth-led protests took place in the context of rising social tensions in response to ongoing police impunity.

The trial for young football fan Omar Laabidi, who drowned in a river in 2018 while trying to escape a police patrol, has been dragging on for over four and a half years. The Ben Arous court held the fifth hearing on 20 October, where the 14 officers accused of causing Laabidi’s death appeared, yet the verdict in the case was deferred until 3 November.

In recent years, the LTDH has recorded almost 20 cases of young people who died in suspicious incidents involving the police, claiming that officials rarely face justice.

Jlassi, who’s been actively participating in and monitoring protests around Tunis since 2018, noted that police aggression has been “on the rise” in the past year along with the use of military trials to convict civilians. IARF counted close to 17 cases of civilians brought before military courts since the chief of state seized power and suspended parliament on 25 July 2021, compared to 12 cases recorded in the previous ten years.

“It’s been a state policy for a long time,” Jlassi said, hinting at an existing “partnership” between judicial and police authorities that prevents bringing police officers to justice.

For Jlassi, the case of Omar Laabidi may be the only hope for justice when it comes to holding Tunisian police accountable, as all the other documented cases of deaths caused by police violence are still pending in the investigation phase.

“The president’s main focus right now is to head toward legislative elections, so he resorts to police authority to prevent any disruption to his project,” Asrar Ben Jouira, human rights activist and head of IARF, told TNA.

She highlighted how the country’s security forces continue to enjoy impunity for grave human rights violations. “Tunisia has been a police state since the time of Ben Ali. Kais Saied makes no exception,” the rights defender said.

Similarly, Ben Jouira observed an “increased incidence” of arbitrary arrests and ill-treatment at the hands of police officers and security personnel.

She pointed out that there was practically no media coverage of the recent demonstrations that spread across different suburbs of Tunis, with protests in marginalised urban areas often under-reported, which keeps a lot of police abuse out of the public eye.

In Jelalia’s view, there is now an “unprecedented” policy of turning to a security-oriented response to dissent, which is particularly “dangerous” because Saied’s presidential one-man rule operates in the absence of functioning democratic institutions.