What’s Throwing The US Diesel Market Out Of Whack: A Primer 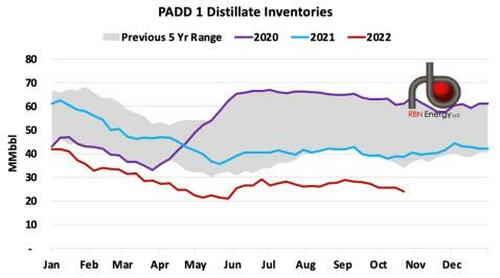 By Housley Carr of RBN Energy

The U.S. market for distillates has been crazy the past few months — especially in PADD 1 —  and given all that’s going on, it’s likely to stay that way for months to come.

Inventories of ultra-low-sulfur diesel, heating oil and other distillates are at their lowest levels for this time of year since before the EIA started tracking them 40 years ago and diesel prices are in the stratosphere, all despite diesel crack spreads being in record-high territory — a strong incentive for refineries to churn out more distillate. In today’s RBN blog, we discuss the many factors affecting distillate supply, demand, inventories and prices and take a look ahead at where the market may be headed next.

It may be true (technically speaking) that everything that comes out of a refinery is a distillate – after all, the first step in refining (after removing salt from crude oil) is boiling the oil and running it through an atmospheric distillation unit to separate crude into diesel oil, kerosene, heavy naphtha, light naphtha and other distilled products. But when we talk about distillates, we’re really talking about “middle distillates” – so-named because they condensate in the middle of the fractional distillation tank. These would include diesel and heating oil and usually jet fuel/kerosene, while vacuum gasoil (VGO) is not included.

Middle distillates typically account for 25% to 50% of a refinery’s yield, depending on, among other things, the facility’s equipment and the qualities of the crude slate used. Refiners can tweak their operations and their crude slates to ramp up (or down) how much middle distillate they produce.

The events that have roiled energy markets over the past couple of years – COVID, Russia’s invasion of Ukraine, the U.S. economic recovery and (more recently) talk of a recession, to name a few – have also altered the dynamics of the U.S. distillates market, nationally but especially in PADD 1 (East Coast).

PADD 1 isn’t just a leading consumer of distillates – it’s pretty much tied with PADD 2 (Midwest) for the #1 spot – it’s also the region most dependent on others for its supply.

As in other parts of the U.S., distillates are used to fuel trucks, tractors, trains and marine vessels of every size.

They are also used in manufacturing, as a backup fuel at power plants that can be fired by either natural gas or diesel, and – importantly – for residential and commercial space heating, especially in the Northeast.

We’ve mentioned in a number of blogs that East Coast refining capacity (concentrated primarily in New Jersey, the Philadelphia area and Delaware) has been declining over the past several years. As a result, only about one-sixth of the ~1.2 MMb/d of distillates that PADD 1 consumes (annual average) is produced in-region — the rest is brought in from elsewhere. Large volumes are piped in from PADD 3 (Gulf Coast) via the Colonial and Products pipelines (the latter formerly known as the Plantation Pipeline) and much smaller volumes are piped in from the Midwest. To help meet its prodigious demand, PADD 1 also is the recipient of distillate imports, mostly from Canada, the Persian Gulf, India, Europe and Latin America.

As we said in the introduction to today’s blog, the standout issue regarding the PADD 1 distillates market right now is that inventories are at a historically low level. As of the week ended October 21, they stood at a hair under 24 MMbbl (right end of red line in Figure 1), compared to more than 38 MMbbl at this time last year (blue line) and more than 60 MMbbl in mid-October 2020 (purple line).

(The average for the third week of October during the 2010-19 period was just over 50 MMb/d, or more than twice the current mark.)

Over the past three Octobers and Novembers (2019-21), implied distillate demand within PADD 1 (based on EIA’s “distillates product supplied” data) averaged 1.2 MMb/d, which suggests that East Coast inventories are only sufficient to meet about 20 days of demand — an extraordinarily thin cushion, particularly as the winter heating season begins in a region that depends heavily on heating oil.

(About 18% of households in the Northeast use heating oil as their primary space-heating fuel, down from 25% a decade ago, according to EIA.)

We’ve heard that 20 days’ supply is a low in the post-WW2 era, which if true is quite a statement.