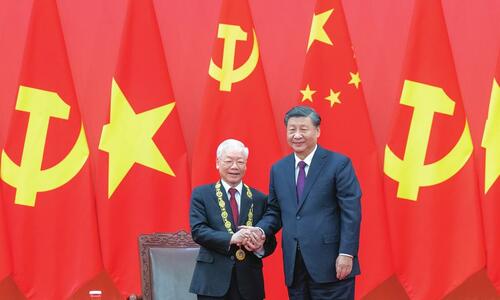 China and Vietnam are looking to deep a strategic partnership which centers on building a “stable” supply chain, but which also hinges on distancing the region from US military influence and presence. President Xi Jinping told visiting Vietnamese Communist Party chief Nguyen Phu Trong on Monday in Beijing that Vietnam is a “comrade and brother”.

The following day, the two released a joint statement, underscoring “the two countries’ commitment to developing healthy and stable bilateral relations from a strategic and long-term perspective during a period of great changes in the world, and their joint unwavering adherence to the leadership of the communist party,” according to Chinese state media.

State media further announced of Vietnam’s leader, “Xi presented the medal to Trong, hailing Trong as a staunch Marxist, and a close comrade and sincere friend of the CPC.”

Xinhua wrote further, citing Xi, “With his great attention and personal promotion, the traditional friendship between the two parties and countries has been consolidated, political mutual trust enhanced, practical cooperation deepened, and exchanges and mutual learning have been increasingly close, Xi said.”

“Vietnam … has made the development of friendship and cooperation with China the top priority in our foreign policy,” Trong told Xi. He became the first foreign leader to visit China since Xi secured a third term.

Much of the summit focused on security in the South China Sea, at a moment Washington and Beijing have been challenging each other militarily in regional waters:

Xi “exchanged in-depth and candid views on maritime issues” with his Vietnamese counterpart, according to the joint declaration released on Wednesday.

They agreed that it was “crucial to properly manage differences and maintain peace and stability in the South China Sea” and for both sides to “refrain from taking actions that complicate the situation and aggravate disputes”.

While China state media touted that Vietnam has agreed to refuse hosting foreign bases – especially US bases – on its soil, the final bilateral documents from the Xi-Trong meeting didn’t mention this.

Regional reports ascribed this to verbal promises made during the Vietnamese leader’s visit. For example, The South China Morning Post wrote, “Morale in Beijing, which is weary of American influence in Taiwan and the South China Sea, will be boosted by Vietnam’s refusal to host foreign bases on its soil, analysts said as Vietnamese Communist chief Nguyen Phu Trong concluded his four-day visit to China.”

How the Pentagon's campaign to recruit Vietnam as military ally against China exposed delusions of the US war strategy@GarethPorter explores a revealing case of US military self-deceptionhttps://t.co/3NjoNSEowT

And a follow-up report in SCMP noted that the final “document made no mention of Trong’s statement that his country would not allow any nation to establish a military base in Vietnam, or join any military alliance, or use force against any country, or work with one country to oppose another.”

Additionally the report said, “Statements released by Vietnam also did not include those remarks, which only appeared in Chinese state news agency Xinhua’s account of the meeting.”