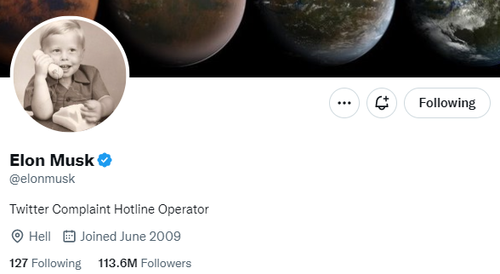 Yesterday, AOC took to the platform (ironic, right?) to voice her opinion about Musk’s planned changes to the company’s business model. Putting aside the fact that Twitter is now a private company and AOC has both zero knowledge of the laws of economics as well as zero say on how the business can and should operate, new “Chief Twit” Elon Musk decided to entertain her critiques nonetheless.

The beef started Tuesday, when AOC Tweeted in response to Elon Musk’s plan to charge $8 per month for Twitter Blue. “Lmao at a billionaire earnestly trying to sell people on the idea that “free speech” is actually a $8/mo subscription plan,” she wrote.

To which Musk, whose Twitter bio has now labeled him as “Twitter Complaint Hotline Operator” and his location as “Hell”, dryly responded: “Your feedback is appreciated, now pay $8.”

Twitter will still be free for most users, but Musk is implementing changes (among massive layoffs) that will see customers charged the monthly fee in order to maintain the current benefits of Twitter Blue and keep their blue “verification” checkmarks.

“One guy’s business plan for a $44 billion over-leveraged purchase is apparently to run around and individually ask people for $8. Remember that next time you question yourself or your qualifications,” AOC Tweeted out yesterday in response to Musk.

Musk then took a jab at AOC for selling $58 sweatshirts on her campaign website.

AOC responded: “Proud of this and always will be. My workers are union, make a living wage, have full healthcare, and aren’t subject to racist treatment in their workplaces. Items are made in USA.”

Shortly thereafter, AOC complained about her Twitter notifications “conveniently” not working: “Also my Twitter mentions/notifications conveniently aren’t working tonight, so I was informed via text that I seem to have gotten under a certain billionaire’s skin.”

“Just a reminder that money will never by [sic] your way out of insecurity, folks,” she wrote shortly thereafter.

We think this one Musk response says it best…