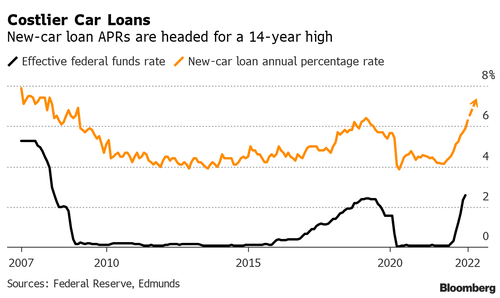 Auto loan interest rates are rising, have hit the highest level since 2019, and will soon jump to 14-year highs.

New data from Edmunds showed the average annual percentage rate on new-car loans was 6.3% in October, the highest since April 2019, according to Bloomberg.

The Federal Reserve is expected to raise interest rates Wednesday again by 75 basis points for the fourth straight meeting in an unprecedented move — the most since the early 1980s to quell rampant inflation. This means the federal funds rate will have a new range of 3.75-4% — the highest level since 2007, and since APRs for new vehicles track the fed funds rate, expect it to hit highs not seen since early 2009 in the near term.

“New-vehicle inventory might finally be improving, but the automotive industry is still on a long road to recovery because rising interest rates are creating a major barrier to entry for car shoppers,” Jessica Caldwell, executive director of insights for Edmunds, said in an email.

Caldwell noted: “Many consumers who have been sitting out of the market due to high prices and limited options will likely continue to do so over high-interest rates.”

“The average price of a vehicle has risen dramatically, there are fewer smaller, budget-friendly vehicles for shoppers to choose from,” Caldwell said. “And on top of that, consumers are paying more for everything else in their lives.”

Meanwhile, APRs for used cars are at a staggering 10.33%.

The Fed is attempting to smash inflation down by raising consumer borrowing costs for car loans, credit cards, and mortgages. Moreover, the Fed is slamming on the economy’s brakes by aggressively hiking while not trying to spark a recession. In doing so, it’s managed to spark an affordability crisis where average Americans can no longer afford new or used cars. Great job, Powell!