“The Old Party Paradigm Is Over, Much As Markets Refuse To Accept It” 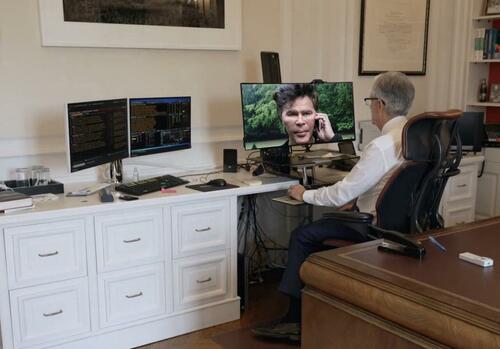 The party is ending / The Party is starting

First, the important good news: the Ukraine grain deal is back on after Russia backed off. As our grains maven Michael Magdovitz comments, the Kremlin phone was probably ringing off the hook… and not from the West, but from hungry Russian allies. Now to the bad news.

The party is ending…

…and all those expecting the Fed to shift in a dovish direction yesterday are being shown up as a bunch of pivots.

The Fed raised 75bp to 4.00% yesterday, as expected. There was an initial market attempt to rally at language suggesting they were aware policy acts with a lag, which sounded pivot-y. Then Powell spoke, and crushed those hopes. True, he flagged the pace of rate hikes might slow from its breakneck pace: but he made it abundantly clear smaller rate hikes would continue for longer than many expected. Moreover, when a journalist pointed out to him that stocks were rising after his latest move, he deliberately underlined that if the FOMC had known in September what it knows now, it would have plotted its dots higher for where Fed Funds will peak. That means a higher terminal rate ahead –the market’s assumption is now 5.10% vs. 4.85% recently– and a deliberate attempt to jawbone markets lower, not higher.

You can make the argument that this is about a wage-price spiral, which Powell said he doesn’t see, despite the ADP report yesterday suggesting nominal wage growth is up to 7.7% y-o-y; or that this is about overheating; or that Powell is wrong, because things are cooling fast; or that he hates financialisation and loves the industrial economy – as the FT flags that the US will be sucking in EU industry crippled by rising power bills; or, relatedly, that this is about the geopolitics of power, and of commodities vs. the global role and value of the US dollar; or any combination of the above. It actually doesn’t matter, because the key conclusion is still the same:

The Party is starting…

…and all those expecting a shift in a bullish stimulus direction are also being shown up as a bunch of pivots.

Speaking earlier yesterday at Hong Kong’s financial shindig, the UBS CEO stated he doesn’t read the US press, only the Chinese, and that global banks are “very pro-China” despite the 20th CCP Congress reiterating its belief in a Marxism-Leninism which says, “The Capitalists will sell us the rope with which we will hang them.” One also has to wonder, if global banks are pro-China, but Western politicians are increasingly not, where does that logically leave said politicians vis-à-vis global banks?

True, money-over-ideology worked nicely for both sides for years. Yet it also did under Lenin’s New Economic Policy in the USSR in the 1920s until that ended with Stalinism, as Joe saw the 1940s coming, and decided to prepare. As unaware of that history as CEOs but perhaps indirectly echoing it, Bloomberg’s Shuli Ren bewails in ‘Hong Kong Bankers Fear for Their Careers’ that: “Xi, for one, doesn’t see bankers offering much value. Six of the 13 new members of the Politburo have backgrounds in science and tech. He Lifeng, widely tipped as the next economic tsar, is not a member of the Politburo Standing Committee, China’s most powerful decision-making body. For decades, financiers in Hong Kong have been China’s biggest cheerleaders and its bridge to developed nations. They advocated for economic growth and argued for a better relationship between the two superpowers when no one else was. Even they’re losing faith in Xi’s China.”

Indeed, Leland Miller of the China Beige Book notes despite screenshots(!) about Covid-Zero being zeroed (as fresh lockdowns hit Shanghai and the world’s largest iPhone factory), past high GDP growth is not coming back – for ideological reasons. “It is over because the Chinese government has identified a continuation of this economic growth model as a vulnerability to CCP rule,” he states. They know the model, which they actually borrowed or co-opted from the West, no longer works; they fear what happens if they add yet more debt, or try outright QE, or monetisation. The result is the structural growth slump we now all see, and few saw coming.

It is true that Soviet economies, and China pre-reform, had soft budget constraints, monetised debts, and repressed inflation. However, today’s China reads history and Marx carefully. Contrary to common misperception, Marx was opposed to the inflation of fiat currency as well as the stupidity and revolution-inducing inequality of “fictitious capital”, preferring the gold standard. Lenin ran dual currency systems in the USSR, one gold backed, one fiat, with dual circulation (external, internal): the gold one won out as long as Lenin was around.

The Social Democrat party is starting to end…

…and Germans look like a bunch of pivots regarding a shift towards China.

Despite our new geopolitical era, Berlin still wants to do more trade with Beijing. Chancellor Scholz, now in China, not only ignored an open letter from 186 Chinese intellectuals and dissidents asking him not to go, but has stressed he is looking to “collaborate” wherever possible. There was a waiting list of 100 top German firms wanting to tag along – a dozen did. In the eyes of critics, including the EU Chamber of Commerce in China, this makes Germany look like a particularly stupid dinosaur gawping up at a falling meteor and wondering if it wants to be friends.

Moreover, the US selling Germany LNG and protecting it is watching too. Do you think there might be more or less desire to pull German industrial supply chains into the cheap-energy US economy now? Or to prevent German capital stock in China exporting back to the US? USTR Tai just made an offer to the EU to join them in green industrial policy, subsidies, and presumably future tariffs against China. Say no and see what happens. And meanwhile the Fed is ensuring global demand for German goods tanks – just as the Germans don’t have any of their own tanks.

The Social Democrat Party paradigm is over, much as it refuses to accept it.

…and the latest headline in a never-ending sequence from this bunch of pivots is that we’ll get an edit button – and half of all jobs there are to go. Hey! That means lower US rates, right?!