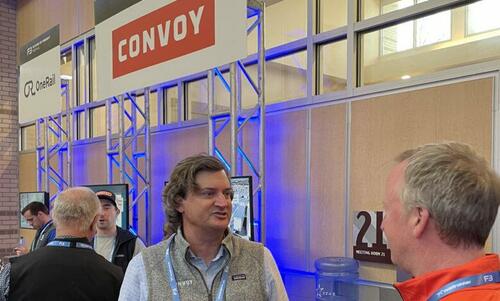 By John Kingston of FreightWaves

Digital brokerage Convoy is seeing a “relatively large number” of smaller carriers putting their trucks on the sidelines for the fourth quarter, according to co-founder Grant Goodale.

Goodale is also Convoy’s carrier experience officer, a position that has him in contact with the smaller and medium-size fleets that are part of Convoy’s network of carriers.

“The spot markets are really tight and almost everybody is taking every bit of work they can,” Goodale said in an interview with FreightWaves at the F3: Future of Freight Festival here. “Despite the fact that consumer spending is at an all-time high, you’re not seeing lots of freight entering the market.”

With conditions getting tougher for independent owner-operators who are having trouble covering their costs, Goodale said that “anecdotally,” he is seeing some owner-operators signing on as employee drivers with larger carriers. But he also said that based on attrition rates through the industry, that move isn’t necessarily long-lasting.

“The data suggests they are absolutely going there but they are not staying,” Goodale said.

There has long been a push-pull relationship between drivers and construction, with workers going from behind the wheel to behind the hammer and back, depending on market conditions. But Goodale said the slowdown in construction is a hindrance to that move now as market conditions deteriorate in trucking. “If there is less construction work, does that mean they are finding other work?” he said of drivers who have recently sidelined their trucks.

Goodale said there was a significant cost squeeze going on for carriers, and it isn’t just from higher diesel prices, which based on the weekly Department of Energy/Energy Information Administration average retail price are up about 50 cents a gallon since the start of October.

“We are not seeing rates keep pace with costs and that is definitely squeezing small carriers,” Goodale said. Add in the fact that demand is not spiking along with costs, and it’s a scenario for a tough quarter.”

With a month of the fourth quarter in the books, Goodale said that “none of these things are shaping up to be a particularly good quarter for smaller carriers.”

Another series of earnings calls has come and gone without the larger carriers discussing higher diesel costs as a major headwind. But those companies are armed with extensive fuel surcharge programs. That isn’t the case for everybody, according to Goodale.

“I would say the smaller the carrier, the less likely they are able to consistently cover their diesel costs through fuel surcharges,” he said. And larger carriers are also in a better position to negotiate discounts with major chains or through fuel cards, which Goodale said Convoy hopes to compete with through its own fuel card program.

The soft expected market of 2023 is leading Convoy to “lean into” more contract business in anticipation of a weak year. But every year is different, Goodale said, noting that in the seven years since Convoy was founded, “every year people say this is a real weird year for freight. I don’t know what a normal year looks like.”

Goodale reviewed some of the programs Convoy offers carriers in its network, including its own quick pay program. If the payment is for a load booked on the Convoy platform, there is no fee — or “haircut” in finance parlance — if payment is in eight to 48 hours. If a driver wants to get paid in eight hours, it’s a 1.5% fee.

While a 150-basis-point haircut for what could be nothing more than 40 hours of cash availability may seem like a lot — run that out to a year, and see what the interest rate is — Goodale said that Convoy “is finding that if they are really in a bind and need to get cash quickly, it’s worth the 150 bps.”

But he said the primary goal of the program “is to help them have more loaded miles.”