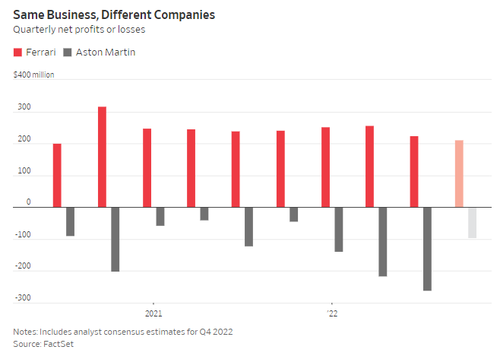 If there’s one piece of news that should put you at ease as we slip into the bowels of Fed-induced economic hell, it’s that the super rich are still buying exotic luxury cars at an impressive clip. See, you feel better already, right?

This was the topic of a new Heard on the Street column over at the Wall Street Journal this week, where Stephen Wilmot also made the point that just because the super rich are buying these cars and they are expensively priced, doesn’t make them extremely profitable to sell.

And just because demand is steady across the luxury car space doesn’t necessarily mean that impressive financial performance is a guarantee. The article looked at two foils in the industry: Ferrari and Aston Martin Lagonda.

Wilmot cited Ferrari’s recent “remarkable order intake” when it reported earnings this week. Chief Executive Officer Benedetto Vigna told investors that demand for the company’s vehicles, usually starting at close to $400,000, is “way above our most promising expectations”.

Aston Martin Lagonda has also seen steady demand, but has been unable to move the volumes it would like to thanks to exogenous factors like Hurricane Ian and shortages of some parts, the report says. Its shares were down 15% this week when it did the opposite of Ferrari and lowered its guidance.

Aston Martin Lagonda is down an astonishing 82% this year and the company still is leveraged with problems generating consistent cash.

The company obviously sees Ferrari as the “model” to follow in the industry – as WSJ notes, it hired former Ferrari CEO Amedeo Felisa to run the company this year. It also hired a former Ferrari engineer as chief technical officer, Wilmot notes, making the argument that AML could be a “turnaround” story if it gets its financial house in order.