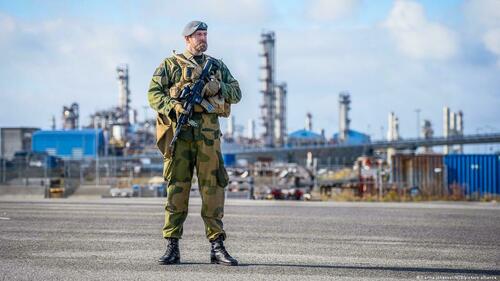 Russia has issued new warnings and threats against Norway, a founding member of the North Atlantic Treaty Organization, for its role in expanding NATO operations in the Arctic region.

“Oslo is now among the most active supporters of NATO’s involvement in the Arctic,” Russian Foreign Ministry Spokesperson Maria Zakharova said Wednesday. “We consider such developments near Russian borders as Oslo’s deliberate pursuit of a destructive course toward escalation of tensions in the Euro-Arctic region and the final destruction of Russian-Norwegian relations.”

Zakharova warned additionally that any future “unfriendly actions will be followed by a timely and adequate response.” The warning comes as Norwegian media and politicians are caught up in denouncing alleged Russian spy plots.

As The Guardian wrote, “Norway is putting its military on a raised level of alert, moving more personnel on to operational duties and enhancing the role of a rapid mobilization force in response to the war in Ukraine – although the prime minister said there was no reason to believe Russia intended to invade.”

“This is the most severe security situation in several decades,” Norway’s prime minister Jonas Gahr Støre told a news briefing. But he added the key caveat, “There are no indications that Russia is expanding its warfare to other countries, but the increased tensions make us more exposed to threats, intelligence operations and influence campaigns.”

Several Russian citizens have been detained in Norway in recent weeks, chiefly for being in possession of drones or allegedly photographing subjects covered by a photography ban. Most have since been released.

…The Russian embassy in Oslo has alleged that authorities there have used drone and ship sightings, as well as incidents involving Russians with cameras, to fuel a “spy mania”.

Tensions with Russia across the Scandinavian region are higher than ever also because of Finland and Sweden’s bids to join NATO. So far it remains that Turkey and Hungary are the final two holdout nations, refusing the fast-track membership, especially as Turkey as accused both Nordic countries of harboring Kurdish “terrorists”.

A prosecutor with Norway's domestic security agency on Friday gave a Russian name for the man who entered the country as a Brazilian but is suspected of spying on state secrets for Russia. https://t.co/idO9yiYE7O

As for Norway, the government late last week slapped new sanctions on top Russian officials and companies. This included at least 30 individuals and seven Russian entities.

“Once again we are acting in concert with the EU to impose sanctions on Russia to maintain pressure on the Russian Government and its supporters,” Minister of Foreign Affairs Anniken Huitfeldt told a last Friday press conference.