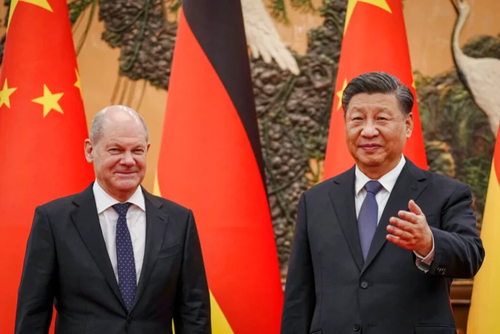 German Chancellor Olaf Scholz met with Chinese President Xi Jinping on Friday in Beijing, where the German leader was on the ground for just 11 hours, and he focused his talking points on the war in Ukraine and containing Russian aggression. But looming large was the symbolism and controversial messaging back home of such a high-level visit, Scholz’s first as German chancellor. After all, he arrived with a team of top CEOs by his side. As CNN put it, the message is clear: “business with the world’s second-largest economy must continue”…

Accompanying Scholz on the whirlwind visit was a “delegation of 12 German industry titans, including the CEOs of Volkswagen (VLKAF), Deutsche Bank (DB), Siemens (SIEGY) and chemicals giant BASF (BASFY), according to a person familiar with the matter. They were expected to meet with Chinese companies behind closed doors,” CNN continued in describing the optics. They also were given a rare exemption to China’s typically strict quarantine and Covid measures for anyone entering the country.

Scholz’s trip, despite being only a day-long, marked the first time a European head of state has visited China since Russia launched its invasion. It was further Scholz’s first major foreign trip as Germany’s chancellor, and comes just after Xi secured a third term as Communist party secretary and president of China.

“We are seeing discussions in China tending more towards autonomy and less economic ties. And these views are ones that need discussing,” Scholz told a press briefing in Beijing. The trip was seen as an attempt to maintain cozy relations with China after key pillars of a successful German economic machine evaporated this year – namely cheap energy from Russia and a prior relaxed approach to security spending.

But as Politico points out, “To his critics, he’s making exactly the same mistakes of overreliance on China as Berlin previously made with Russia.”

Foremost among them is German Foreign Minister and Greens party member Annalena Baerbock, who didn’t hide her disapproval and discomfort with Scholz’s meeting in stating just ahead of the trip, “The federal chancellor has decided the time of his trip. Now it is crucial to make clear in China the messages that we laid down together in the coalition agreement,” as cited in Der Spiegel newspaper. She and others are piling on pressure for a new, more assertive stance toward China.

“As is well known, we clearly stated in the coalition agreement that China is our partner on global issues, that we cannot decouple in a globalized world, but that China is also a competitor and increasingly a systemic rival,” said Baerbock. She added: “And that we will base our China policy on this strategic understanding and also align our cooperation with other regions in the world.”

Seeking to defend himself against such growing criticisms, also as the EU is seeking to put pressure on Beijing to turn more definitively against Russia’s war aims in Ukraine, Scholz wrote in an op-ed this week, “When I travel to Beijing as German chancellor, then I do so also as a European” – suggesting the trip in no way compromised the EU’s united front.

However, he acknowledged, “It is here that new centers of power are emerging in a multipolar world, and we aim to establish and expand partnerships with all of them.” And he noted, “Thus, in recent months, we have carried out in-depth coordination at the international level — with close partners such as Japan and Korea, India and Indonesia, and countries in Africa and Latin America too. At the end of next week, I will travel to Southeast Asia and the G20 summit, and while I’m visiting China, Germany’s federal president will be in Japan and Korea.”

The op-ed just written by Olaf Scholz 🔽 is worth a read.

Biggest bombshell: "New centers of power are emerging in a multipolar world, and we aim to establish and expand partnerships with all of them"

Following the Friday meeting with President Xi, Scholz said he urged the Chinese side to remove barriers for closer economic ties:

Scholz said he had told Xi that China was becoming “more difficult” for German companies, in terms of market access, the protection of intellectual property and the “interruption of economic relationships” as the country moved towards “autarky”. He said he had told his hosts “how important it is in our view to rectify these imbalances”.

Scholz later told reporters that he and Xi had discussed what could be done to ensure a “level playing field” for German investors in China. In his press statement, premier Li Keqiang acknowledged Germany and China had “differences” and said these had been discussed. “But we still respect each other,” he said.

And on the foreign policy front, Scholz urged President Xi Jinping the Beijing must use its “influence” on Moscow to halt the ongoing invasion of Ukraine. “I told President (Xi) that it is important for China to use its influence on Russia,” Scholz said in a statement after the meeting. “Russia must immediately stop the attacks under which the civilian population is suffering daily and withdraw from Ukraine.”

Scholz reminded the Chinese leader that all major global powers, including the West, had vowed to respect the UN charter and “principles such as sovereignty and territorial integrity,” which is being violated by Russia in Ukraine, according to the statement.

The two leaders also talked about the deeply alarming possibility of nuclear escalation, as well as the newly restored but tenuous Ukraine grain export deal. Sholz at a news conference lashed out at the Kremlin, saying “Hunger must not be used as a weapon.”

Chinese state media affirmed that Xi Jinping called on all world powers to “reject the threat of nuclear weapons and advocate against a nuclear war to prevent a crisis on the Eurasian continent” – while leaving his words somewhat vague regarding Russia or Putin and the West’s accusations of nuclear saber-rattling. Both agreed that nuclear threats and potential use related to the Ukraine crisis must be out of the question:

…Scholz told reporters he was “glad” that he and Xi had “reached an understanding . . . that there can be no escalation through the use of tactical nuclear weapons”.

“Everyone here in China knows that an escalation of the war would have consequences for us all,” he added. In an earlier statement to the press after the talks, Scholz said he and Xi agreed that “nuclear-threatening gestures are irresponsible and extremely dangerous”.

Interestingly, even as Scholz told Xi that Germany supports ‘one China’ rule, he took the opportunity to issue warnings “I have … made it clear that any change in Taiwan’s status quo must be peaceful or by mutual agreement,” Scholz said alongside China’s outgoing premier Li Keqiang at a press event.

But then, “Scholz warned China against military intervention in Taiwan and called for the protection of human rights in the Chinese region of Xinjiang, stressing that all United Nations members have agreed to protect the rights of ethnic minorities and so calling for those protections now is not an interference in China’s internal affairs,” according to a US media report on the visit.