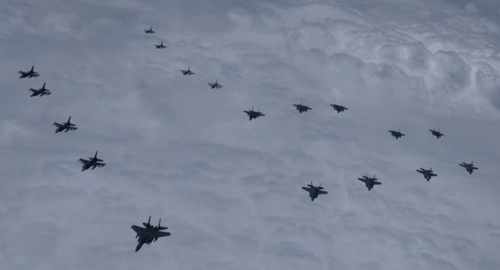 The US and South Korea have extended their large-scale aerial war games in response to North Korea’s unprecedented number of missile firings over the last two days, which stands at 27 or more launches, including an ICBM (which some reports said was a failed launch), which sent citizens in some parts of Japan scrambling for bomb shelters amid emergency alert sirens the day prior.

This year’s ‘Vigilant Storm’ US-Korea drills are the largest ever, involving almost 100 American warplanes and 140 of South Korea’s, and Pyongyang says it has been responding to this provocation and threat to its security. Amid these drills being extended, the north has answered amid the growing tit-for-tat dangerous muscle flexing, launching some 180 flights near the shared Military Demarcation Line which marks the boundary between the rival countries.

South Korea responded to picking up on the large wave of enemy aircraft across from its border by scrambling 80 of its own, including F-35A stealth fighters.

According to details of Friday’s show of force on either side of the dividing line in CBS News, based on South Korean media:

South Korea’s Joint Chiefs of Staff said the North Korean warplanes were detected in various areas inland and along the country’s eastern and western coasts but didn’t come particularly close to the inter-Korean border.

None of the planes breached the South Korean military’s virtual “tactical action” line 12 to 31 miles north of the Koreas’ land and sea boundaries for monitoring purposes to give the South enough time to respond to provocations or attacks.

Secretary of Defense Lloyd Austin said while announcing the extension of joint drills on agreement by South Korea’s Defense Minister Jong-Sup Lee that “at this time of heightened tension, our alliance is ironclad.”

“We’re returning to large scale exercises to strengthen our combined readiness and our ability to fight tonight if necessary,” he added.

As for the South Korean defense chief, he warned amid growing concerns Pyongyang could be preparing for a nuclear test, the first in five years, that “any nuclear attack by the DPRK, including the use of tactical nuclear weapons, is unacceptable.” Jong-Sup Lee added that such unthinkable escalation would lead to “the end of the Kim Jong un regime.”

Pyongyang has slammed the Vigilant Storm drills to its south “an aggressive and provocative military drill targeting” North Korea, and has warned both Seoul and Washington will “pay the most horrible price in history” if it persists with the provocations.