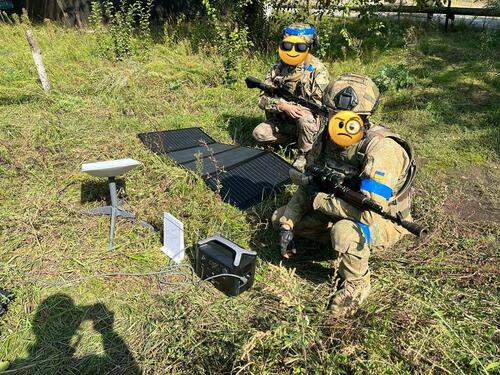 More than 1,000 Starlink satellite internet terminals for Ukraine’s military to boost communication channels on the modern battlefield went dark, reported CNN, citing two sources familiar with the outage. This report comes even though Elon Musk has pledged to continue funding Starlink operations in the war-torn country.

The outage has affected 1,300 Starlink terminals that Ukraine purchased from a British company earlier this year and used in combat-related operations. Each terminal costs $2,500 per month, with the batch costing $3.25 million per month.

Before the terminals went offline, Ukraine’s Ministry of Defense requested their British counterparts pick up the monthly bill several weeks ago, which amassed to a whopping $20 million since the 1,300 terminals were deployed in March.

But since no one picked up the outstanding bill, the terminals all went dark on Oct. 24, according to one person briefed on the situation. They said this had sparked a “huge problem” for Ukraine’s military since the terminals are the primary communication link on the battlefield.

Starlink’s parent company SpaceX penned a letter to the Pentagon in September, informing it could no longer maintain the service in the war-torn country unless it received funding.

Musk recently tweeted the Ukrainian “operation has cost SpaceX $80 million and will exceed $100 million by the end of the year.”

Musk estimated that the 25,000 Starlink terminals in Ukraine would cost his company $400 million over the next 12 months.

By mid-Oct., Musk appeared to change his mind in a tweet, in which he said:

“The hell with it … even though Starlink is still losing money & other companies are getting billions of taxpayer $, we’ll just keep funding Ukraine govt for free.”

However, one senior defense official told CNN that the Pentagon is actively negotiating with SpaceX to get the much-needed resources to keep Starlink operational in Ukraine.