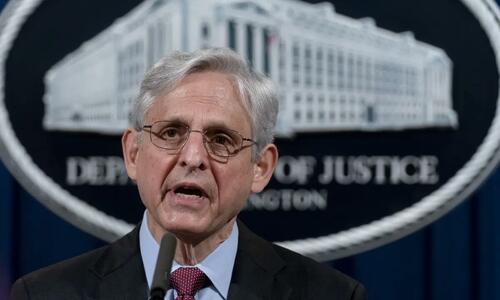 Republican members of the House Judiciary Committee released a massive report on Friday detailing whistleblower disclosures about the politicization of the Justice Department (DOJ) and FBI under Attorney General Merrick Garland and FBI Director Christopher Wray.

According to the report, Garland has been a “willing participant of the Biden Admin’s weaponization of law enforcement,” while the FBI has “abused its law-enforcement authorities for apparently political purposes.”

What followed was a laundry list of incidents and whistleblower reports illustrating how politicized federal law enforcement has become.

What’s more, the report shows that the FBI has been inflating domestic extremism figures to fit an agenda.

One of the most significant findings of the report showed that the FBI has been encouraging its agents to artificially inflate the number of domestic violent extremism (DVE) incidents.

For years, Democrats—including President Joe Biden—have claimed that DVE events comprise one of the largest threats to American national security. Specifically, Democrats have blamed conservatives and “white supremacists” for most such incidents.

During the 116th Congress, Democrats even went so far as to propose a bill that would substantially bolster DOJ resources to combat DVE. –Epoch Times

“White supremacists and other far-right-wing extremists are the most significant domestic terrorism threat facing the United States,” reads the bill.

According to the whistleblowers, however, “FBI leadership is pressuring line agents to reclassify cases as domestic violent extremism even if the matter does not meet the criteria.”

“At a time when the Biden Administration maintains that DVE is the ‘greatest threat’ facing the United States, the FBI appears to be complicit in artificially creating the Administration’s political narrative,” wrote the Republican lawmakers, who say the agency is fostering an environment that puts pressure on agents to rack up DVE case counts.

“One whistleblower explained that because agents are not finding enough DVE cases, they are encouraged and incentivized to reclassify matters as DVE cases even though there is minimal, circumstantial evidence to support the reclassification,” says the report.

The FBI has also fudged field office numbers to fit the DVE narrative – and “is misrepresenting the scale of [DVE]” by categorizing various investigations stemming from the Jan. 6 Capitol police as organic cases discovered by local field offices, rather than a single investigation of a single incident.

“In both ways, the FBI is fueling the Biden Administration’s narrative that domestic violent extremism is the biggest threat to our country,” wrote the Republicans.

The Federal Bureau of Investigation, under the stewardship of Director Christopher Wray and Attorney General Merrick Garland, is broken.

More via The Epoch Times;

In at least one case of DVE, the attempted kidnapping of Michigan Gov. Gretchen Whitmer, the FBI played a much more active role.

Ahead of the 2020 election, a plot was uncovered to kidnap Whitmer, whose COVID policies sparked intense national debates before the election.

The alleged would-be kidnappers were right wing, and originally reports suggested that the plot had developed organically.

Despite the legal questions raised by defense attorneys, the three men were later convicted.

GOP efforts to get answers about the incident were met with silence, the report noted. Thus, the FBI’s motives in assisting the plot remain unclear.

To bolster their claims of politicization by the FBI, Republicans cited several incidents involving targeted use of federal resources against conservatives.

For instance, Republicans noted Garland’s infamous “school board memo” as a case in point.

In a September 2021 letter to President Joe Biden, the National School Boards Association (NSBA) characterized disruptions at school board meetings across the nation as “a form of domestic terrorism and hate crime.”

Specifically, the NSBA was referencing an increasing number of parents across the United States attending school board meetings to voice their opposition to the content being taught their children—including controversial, Marxism-inspired critical race theory, far-left-wing positions on sexuality and gender, and, in some cases, even explicit or pornographic sexual images.

The NSBA proceeded to ask for federal assistance in dealing with these frustrated, outspoken parents—assistance that Attorney General Merrick Garland promptly provided.

Days after the NSBA letter, Garland issued a memo directing federal law enforcement to help address the alleged “disturbing spike in harassment, intimidation, and threats of violence” against teachers and school leaders. Garland’s response immediately raised suspicions among some Republican members of Congress, who have sought to keep the issue alive and have responded with promises like a “parents’ bill of rights” if they take Congress next year.

In their report, Republicans called this affair “unacceptable.”

“As the radical left continued to push a woke agenda on America’s children, parents across the country started to speak out at school board meetings against critical race theory, mask mandates, and controversial curricula,” they wrote. “As more parents spoke out, the [NSBA] and the Biden Administration colluded to create a justification, articulated in an October 4 memorandum from Attorney General Garland, to use federal law-enforcement tools to silence parents.

“Committee Republicans have repeatedly called on Attorney General Garland to rescind his ill-conceived memorandum that brought the heavy hand of federal law enforcement down upon America’s parents,” they added.

These calls have of course gone unanswered.

“It is unacceptable for the Biden Administration to use federal domestic terrorism resources to target American parents,” the lawmakers said. “The use of these resources chills protected First Amendment activity as parents rightfully fear that their passionate advocacy for their children could result in a visit from federal law enforcement.”

Republicans have made clear that they aren’t finished with the issue: on Oct. 13, Judiciary Committee Ranking Member Jim Jordan warned Garland to preserve all documents related to the memo in preparation for further GOP investigation.

Also mentioned in the report was the shocking decision by the FBI to mount an unprecedented raid on President Donald Trump’s Mar-a-Lago Florida home.

The raid was allegedly seeking classified documents that Trump had brought with him from the White House.

However, Republicans insisted that such an unprecedented raid should not have been undertaken lightly, and Republicans have pointed to the raid as another instance of political bias by federal law enforcement.

Additionally, the report notes the FBI’s role in suppressing the since-authenticated story about Hunter Biden’s laptop, with Republicans saying that Biden has received “preferential treatment from federal law enforcement.”

The contents of the laptop included several photos of Hunter Biden in sexual situations, sometimes with people who appeared to be substantially younger than 18. Others showed the president’s son using drugs like crack cocaine. Still, other sections of the laptop’s contents raised questions about the Bidens’ business dealings, with some emails and texts suggesting that Hunter Biden may have peddled his father’s prestige and influence for pecuniary gain.

The story was discovered by the New York Post, a conservative-leaning media outlet founded by Alexander Hamilton. After posting the story to their Twitter page, the New York Post was suspended pending the removal of the story. Similar suppression followed with other media outlets who reported on the contents of Hunter Biden’s laptop.

According to the report, some of this may not have been organic behavior by social media platforms.

The Judiciary Republicans noted that, during an August 2022 appearance on Joe Rogan’s podcast, Meta CEO Mark Zuckerberg admitted that Facebook had suppressed the story at the FBI’s urging.

At the same time, dozens of national security and federal law enforcement agents signed a letter at the time claiming that the story was Russian disinformation—a claim which has since been shown to be patently untrue.

Around the same time, Republicans unveiled a report showing that the FBI had been aware of the allegations surrounding Biden’s business dealings with Chinese and Ukrainian interests for years, but had not taken action to look into the potential national security threat.

Republican efforts to get answers for this apparently significant oversight by the DOJ and FBI were met with silence. But GOP findings do provide some clues.

According to the report, a whistleblower allegation “suggests that FBI leadership in Washington may be the reason why the FBI seems to have provided Hunter Biden with special treatment.”

According to Senate Judiciary Committee Ranking Member Chuck Grassley (R-Iowa), who discovered the role played by Thibault, the agent did not give proper reason for closing the investigation under FBI rules of conduct. Thibault’s motivation in closing the case remains unclear.

The report is likely a taste of the investigations that Americans can expect if Republicans retake at least the House in the midterm elections, as pundits predict will be the most likely outcome.

Beyond the FBI and DOJ, Republicans have indicated several topics they may look into as the majority.