Maybe The Fed Too Was Trolled 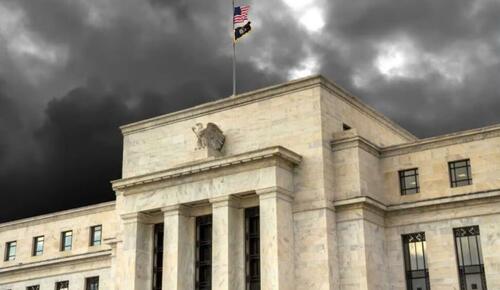 Authored by Jeffrey Tucker via The Brownstone Institute,

The Federal Reserve – and central banks the world over – played a crucial role in making lockdowns possible and weaponizing the panic of politicians. As the lender of last resort and the provider of liquidity for the entire federal government, it removes normal fiscal restraint. It writes checks that cannot bounce to fuel governments in normal times but is always ready to make possible emergency spending too even if existing revenue and public consensus is otherwise absent.

Starting with the $2.2 trillion CARES act of March 27, 2020, and continuing for a full year, Congress massively subsidized and hence funded and rewarded states that locked down, enabling stimulus payments to businesses and individuals amounting to some $10.4 trillion over two years. It was all funded by debt that the Federal Reserve added to its balance sheets, even while the Fed drove interest rates back to zero in the hope of avoiding economic collapse.

In short, the lockdown was monetized with the printing press. Without a Fed, spending on that level would have destroyed the credit worthiness of the US. So yes, the Fed is wholly culpable in making the entire calamity possible and allowing for its continuation for two years and more. The results are as inevitable as the sunset: we now face the highest rates of inflation in forty years. Because central banks around the world collaborated in this operation, inflation is global too.

There was no avoiding this fate. Early on, I joined many others in doubt that Fed chairman Jerome Powell was serious about stopping inflation. Initially, it seemed like his reversal from the zero-interest rate policy — the one that began back in 2008 and eventually unleashed this whole beast — was cosmetic. But he has kept it up. Six times this year he has bumped up the federal funds rate. And he promises there is more to come.

Yes, there have been terrible consequences of this tightening for bubbly markets. Real estate is crashing hard. We would call it a buyers’ market if there were buyers. There seem only to be sellers but they are having little success because financing is too expensive. The curves in home sales are turning vertically downwards. In some ways, the results could be worse than in 2008 simply because the crazy boom was in such close calendar proximity to the bust.

Then there’s devastation to the bond and stock markets, plus an emerging crisis in the tech sector that flew so high during lockdowns, with job losses and hiring freezes everywhere. Twitter’s firing of 50% of workers will likely be the norm in the tech sector in a matter of months.

To top it off, high inflation isn’t going anywhere, and, in some sectors like utilities, is higher than ever (14%). Nothing Powell is doing now is going to fix that problem in the near and medium term. We are stuck with $6.5 trillion in newly printed dollars sloshing around the world today. And that is added to by the damage done by central banks the world over. All out of panic.

And yes, it is Powell’s fault. Now he is trying to reverse the damage he caused by driving rates higher and higher, virtually guaranteeing the entrenchment of stagflation.

Why is he doing this? One possible theory: he is mad as hell. I explain why in the scenario below which combines what we know with new research and fills in some gaps with my own informed speculations.

Think back to the first and second quarters of 2019. Powell had already decided that he was done with zero-interest-rate policies. He started to tighten money by raising rates in the Spring and Summer. He was determined to patch up the Fed’s balance sheet and offload all the junk they had bought over the previous ten years. This was his policy and he was determined to push through. He flinched a bit in the Fall of 2019 but generally had every ambition to clean up the mess.

Then February 2020 came along. As best we can tell from documents that we’ve pieced together and connections we’ve made, Powell was likely getting phone calls and office visits. They were not only from Anthony Fauci but also from the National Security Council and FEMA, which was then itching to take over pandemic planning. They eventually did.

Powell was surely told that the virus was much worse than a regular flu bug. It was a result of a lab leak in Wuhan, China, the one funded in part by US taxpayers indirectly through a grant from the National Institutes of Health. But now this very lab has released a bioweapon. That meant that national security was at stake.

We are at war, he was likely told, and he’d better get on board. He didn’t want to but, at the same time, it’s better when you are Fed chairman not to be accused of sedition in the midst of a major national security operation.

And so, he decided to go along. The long march to profligate credit expansion began with lowered federal funds rates on March 5, 2020. This was before lockdowns had begun in the US and before Congress had allocated any money to states and the pandemic response. Following travel restrictions, the release of the HHS pandemic plan on March 13, and especially following the March 16 lockdowns, each step toward easy money was more extreme than the last. 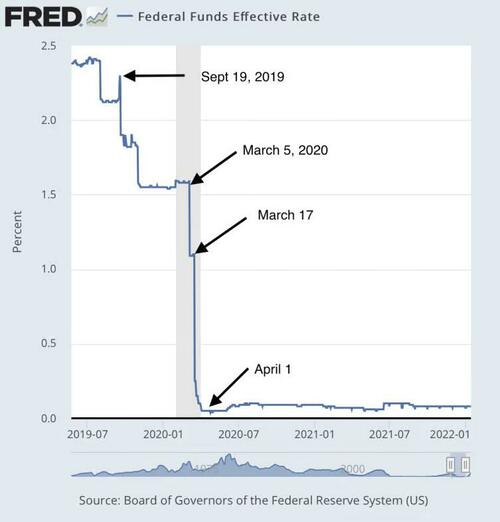 Powell was there, ready to buy any and all debt that Congress created. It kept going on and on, for more than $10 trillion by the time things settled down. Powell was good for $6.5 trillion of that, with the rate of money expansion reaching 27% at the height. 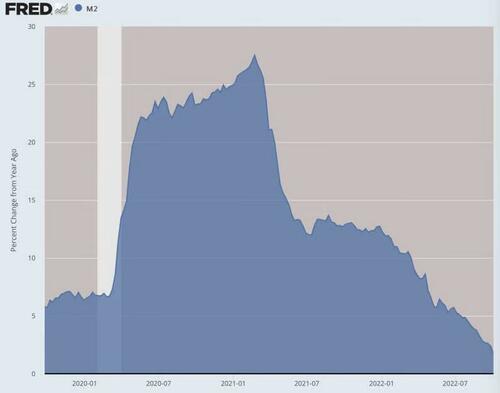 The entire time, because he is not an idiot, he knew for sure what the results would be: inflation, pricing chaos, and financial disaster. But he went along because FEMA, the NSC, and the Department of Homeland Security told him that this was a better fate than mass death. And that’s what they believed or pretended to believe.

Public health officials made every effort to make apocalyptic predictions come true. They distributed deeply flawed PCR tests, and subsidized hospitals provided they declare Covid deaths, and encouraged misclassified people all over the place. The National Security Council and FEMA, along with the CDC, set out to get Big Tech and the national media to join them in the holy crusade against the pathogen

But there was a problem. As time went on, it became ever more obvious that the pathogen behaved like a textbook respiratory virus. It was severe in the elderly with comorbidities but had only a 0.035% infection fatality rate for anyone under the age of 70. Meanwhile, the lockdowns that the Fed’s money pumping made possible killed more people than the virus, based on excess death data from 2021. And the vaccine that was supposed to solve all the problems didn’t work as advertised.

Meanwhile, we are stuck with terrible inflation results that have so harmed the economic well being of everyone. Powell is being blamed for it all. He came into office with the hope of going down in history as a great Fed chairman like Volcker but has been stuck with the results of policies that he quite possibly never wanted.

Perhaps this is what accounts for his current anger and his dogged determination to strangle the inflationary beast one way or another. His powers are limited mostly to messing around with interest rates but that is what he is doing. He has come to believe that his best hope at this point is to get real interest rates into positive territory.

What does this mean? It means that there are two or three increases of 75 basis points left in his arsenal. That will get the federal funds rate to 6%, still below the Fed’s favorite measure of inflation, personal consumption expenditures. But he might be betting that the damage is cooling off. At this point, and perhaps it will happen by the Spring of 2023, he will obtain a match of the PCE rate and the federal funds rate, if he is lucky.

Even if Powell is successful, there is a massive ocean of money out there that needs to wash through the global economy, like a virus that must become endemic. The velocity of money is increasing right now, and labor costs are rising too, which means that inflation is wholly embedded, as David Stockman has observed. Prices have not increased enough to make business growth viable for anyone but the largest companies. Meanwhile, savings are plummeting and credit card debt is rising.

Based on what we are seeing now, we have another year of inflation ahead of us before it drops down to the Fed’s target of 2%. Meanwhile, there will be no going back to 2019 prices in any sector.

Powell knows this. He hates it but he is determined not to be blamed for it. For his part, he believes the blame lies elsewhere: with the apocalyptics, the conspirators, a profligate Congress, a confused President, and the shadowy bunch in the national security state. With them, and under this scenario, he is not likely on speaking terms.

Meanwhile, the rest of us are left with stagflation as far as the eye can see.

What’s important at this point is to avoid the crack-up boom that can sometimes follow these kinds of policy disasters. We should count ourselves lucky if we somehow avoid that plus dodge the bullet of a full-scale financial crisis.