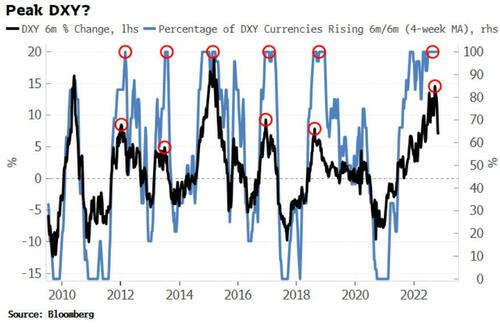 The dollar’s sharp selloff on Friday, overbought extremes and seasonality point to further downside in the coming weeks.

US jobs data on Friday triggered an aggressive drop in the dollar. The DXY fell 1.8% – that might not sound much, but it’s in the bottom 0.2% of all moves in the DXY going back to 1970. Generally, such moves see follow-through: when the DXY sells off by at least 1.8% in a single day, it goes on to fall an average of 0.2% over the next five days. Over the next 30 days it is approximately flat, but over the next 100 days the average fall is 2.2%.

This accords with breadth data for the DXY, which is at extremes. All currencies that are part of the DXY basket are rising on a six-month basis. As the chart below shows, such extremes almost always mark interim peaks in the dollar.

Moreover, seasonals start to shift against the dollar into year-end. November has a small positive seasonal bias for the DXY, but December sees a large negative bias. 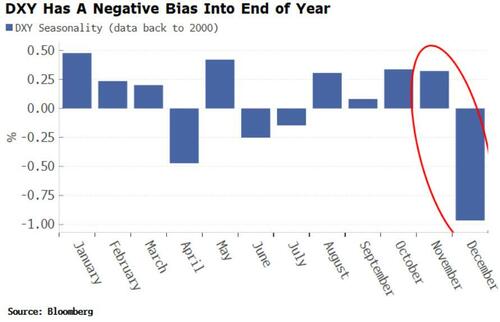 Speculators (according to CoT data) have started to get net long EUR/USD. The euro makes up almost 60% of the DXY basket so sentiment for the common currency is pivotal for the behavior of the DXY.

As the ECB inches up its hawkish rhetoric, European assets are looking more attractive. While the more aggressive Fed hiking cycle has made FX-hedged USTs a losing proposition compared to local debt for Japanese investors, European debt still offers a positive pick-up versus JGBs (even if the pick-up has been falling). Near-term risk for the euro has also eased at it looks like Europe will avoid some of the worst-case scenarios imagined for an energy crisis this winter.

On the other hand, the risk has risen that the Fed now disappoints versus expectations. Last week’s Fed meeting saw the expected peak Fed rate rise, but the bank intimated it will move more slowly to get there. More time means more opportunity for growth to disappoint, or inflation to slow –- as leading indicators anticipate –- leaving markets, including the dollar, more sensitive to a change in Fed’s direction.