The Slightest Positive News Is An Excuse To Buy

A rebound in Chinese stocks built on flimsy evidence, a Federal Reserve not ready to turn dovish and an unconvincing earnings season. Yet, investors are chasing another bear market rally.

With so much negativity priced in over the past months, and positioning so light, any kind of vaguely positive news seems enough to extend the rebound. Last week’s Fed meeting might have pointed to no imminent turn in rates, but just the idea of the central bank going a touch slower was enough for the market to brush off its initial disappointment.

Since hitting its lowest in almost two years in late September, the Stoxx Europe 600 Index has risen for four weeks in five, rallying about 9% in the process. Even Friday’s data showing a still strong labor market and signaling no end to the Fed’s aggressive hiking path wasn’t enough to halt the rebound.

Momentum certainly favors almost all major benchmarks right now, with Asian markets the latest to join the party last week after a flurry of market-friendly headlines — along with unverified talk of a China reopening — drove risk assets.

While officials at China’s National Health Commission sought to dispel wild rumors of Covid-zero exit over the weekend, the reopening speculation has offered just the excuse that weary traders needed to buy stocks after suffering months of losses, with Hong Kong’s Hang Seng Index up 3.1% on Monday.

A poll of JPMorgan clients from last week showed that equity positioning among investors is neither super bearish nor overly bullish. Among those surveyed, 47% plan to increase equity exposure in coming days and weeks.

The current earnings season has mainly been supportive of the rally, according to JPMorgan analysts led by Marko Kolanovic. In Europe, 62% of Stoxx 600 companies that reported so far have beaten estimates, the firm’s strategists say. 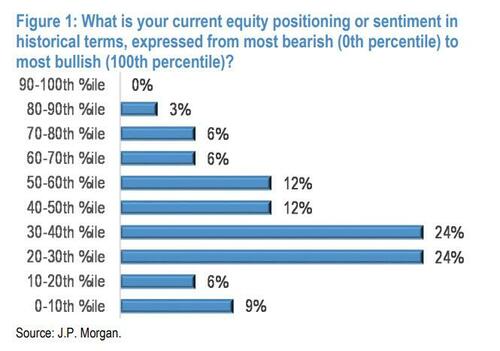 To be sure, investors are fleeing to the safety of cash funds at the fastest pace since the coronavirus pandemic, with inflows of $194 billion since the start of October, according to EPFR Global data cited by Bank of America on Friday.

“Many investors are at risk of being trapped in their under-positioning into year-end,” says Nomura’s Charlie McElligott. Those that don’t begin to cover shorts or buy the dip might have to do so if stocks keep trending higher, he says.