Used-Car Prices Collapse The Most Since Lehman Meltdown

With soaring borrowing costs, the Federal Reserve has slammed the brakes on the once-booming used car market. The latest data on wholesale used-vehicle prices show October’s decline on a year-over-year basis was the worst since the financial crisis over a decade ago.

The Manheim Used Vehicle Value Index for October declined to 200, or about 10.6%, the worst decline since December 2008 when the global economy was melting down (and the 5th largest decline ever)…

The Fed’s rapid pace of rate hikes this year is slowing demand, as Edmunds data showed the average annual percentage rate on used-car loans was a staggering 10% for some borrowers.

The index that tracks the price of what car dealerships pay at auto auctions has slid for 8 of the nine months and declined for the 5th straight month.

Since the Fed hasn’t blinked (yet) and borrowing costs continue to skyrocket, wholesale used-vehicle prices could cool significantly more. 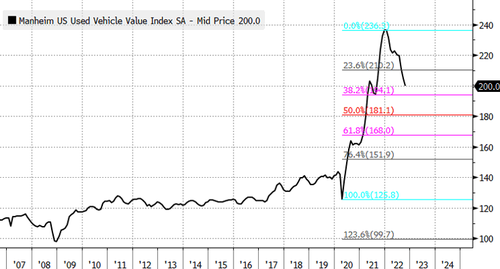 The slump in wholesale used-vehicle prices could be a harbinger of when the Fed begins to hike interest rates at a slower pace.

“Used car prices, once considered the barometer of how bad inflation has become, are now moderating. In fact, they have been dropping for a year. As supply-chain shortages moderate, this closely-watched gauge will likely continue to decline, helping curb overall inflation. The move may also support the narrative that the Fed can scale back its rate increases, boosting stocks,” Bloomberg’s MLIV Vincent Cignarella wrote. 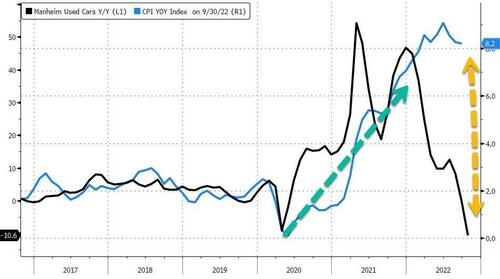 The bad news about sliding wholesale used-vehicle prices is when they crush the retail market, there will be so many new buyers underwater in their vehicle loans.

Signs of distress are already materializing for consumers with subprime and deep subprime credit scores, according to Mish Talk. 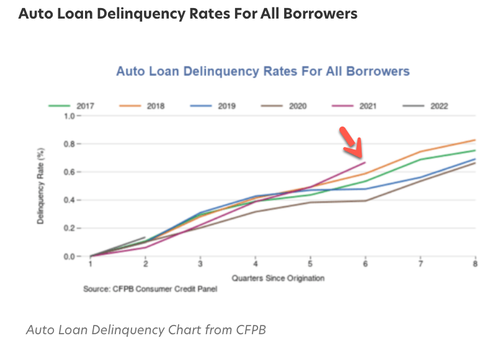 As delinquencies rise and the layoff cycle begins, the repossession wave has already started.

The Car Market Is Collapsing 🚨 🚨 🚨

And the used car bubble could cascade into the structured product segment of the financial market as big banks hold a lot of consumer debt.

Meanwhile, shares of Carvana crashed 24% Monday after the company missed Wall Street’s top- and bottom-line expectations for the third quarter as the demand for used cars plummeted.

Readers may recall it was back in April when we asked a straightforward question: “Are Used Car Prices About To Peak For Real This Time?”

… and with a little bit of time, we were right. We expect deals, especially in the used car luxury segment, to materialize in 2023.