Vietnam Gas Stations Start To Close Due To Widespread Shortages 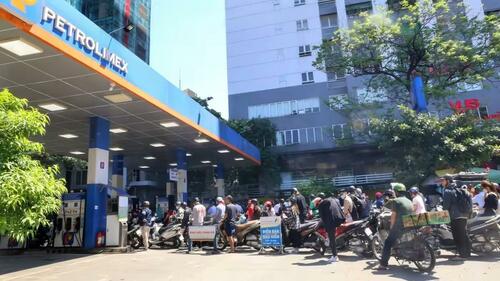 While the US awaits with bated breath to see if there will be any diesel inventories after the midterm elections (see “Forget Oil, The Real Crisis Is Diesel Inventories: The US Has Just 25 Days Left”), other countries are already seeing gas stations run dry. Take Ho Chi Minh City, the city known as Vietnam’s economic engine, whose gas stations are being forced to suspend operations due to shortages of the fuel.

Believe it or not, it is possible to have an even worse government response to an energy crisis than that of the US democrats, and Vietnam is it: a tangle of reactions to a constrained petroleum market – including government price controls and distributors’ decreasing profits – has worsened the country’s gasoline shortage, increasing the burden on domestic refineries.

While these refineries are moving to increase gasoline production, it will take time for Vietnam to fully solve the fundamental problems behind its petroleum crisis according to Nikkei Asia.

The government in mid-October called on two refineries to boost output to the maximum extent possible in a bid to meet domestic demand. The government also asked distributors to speed deliveries to gas stations. PetroVietnam, the country’s largest state-run oil company, responded by raising the operation rate of its Dung Quat refinery in the central province of Quang Ngai to 109% from 107%. A refinery executive said the rate can be pushed to 110% or even higher, should the government make further requests.

Oil refineries generally save some production capacity even when declaring they are running at 100%. When they crank up production during emergencies, their operation rate can surpass 100%. At the Nghi Son refinery in the northern province of Thanh Hoa, in which Idemitsu Kosan of Japan has a major stake, production at the beginning of the year had to be substantially cut as it failed to procure sufficient funds to import crude oil. Since April, however, the refinery has been operating near full capacity. According to a refinery source, the plant can afford to increase its operation rate.

Alas, these measures are too late to fix what is already a major crisis: since early October, several hundred gas stations in Ho Chi Minh City, the country’s biggest metropolis, and in surrounding cities in southern Vietnam have had to occasionally suspend operations, saying they have nothing to sell.

One reason for this is that distributors have been unable to pass on their rising costs due to what is effectively a government cap on gasoline prices, according to industry sources. Smaller distributors have been hit particularly hard, discouraging them from supplying stations as their profits turn too meager.

Another reason gas stations are temporarily closing is the lack of refineries in the southern part of Vietnam, where Ho Chi Minh City is located and which accounts for about 45% of the country’s demand for oil and petrochemical products.

Even in the capital of Hanoi, some citizens have rushed to gas stations fearing that the fuel shortage will soon spread north. “Another gas station was closed,” said Nam, a weary-looking commuter refueling his motorcycle. “Here I at least got gas after waiting for 20 minutes.”

Since motorcycles are a common means to commute to work and school in the country, the gasoline situation is hampering the daily activities of many Vietnamese.

Two refineries meet a little more than 70% of domestic demand for oil products, but they have found themselves at a disadvantage since the start of the Ukraine war, setting off a chain reaction in global energy markets. Now that “European countries are buying large amounts of petroleum products,” a high-ranking government official said, “a small country [like Vietnam] finds it hard to augment its purchases.”

And here is why central planning always fails: in Vietnam, the government sets the retail price of gasoline, altering it every 10 days in line with price movements on the international market. The country’s refineries must accept the government mandate, which means enduring today’s especially volatile international prices.

But there are also domestic factors behind Vietnam’s supply constraints. Early this year, the Nghi Son refinery’s operating rate fell, leading to a shortage of gasoline across the country. The government itself is adding to the sense of crisis despite the fact that it is now considering more frequent price updates and altering the formula it uses to change prices.

Prime Minister Pham Minh Chinh has said more timely price adjustments could help matters. As things now stand, the price control system tends to make oil-related businesses hold off on selling their products as they wait for international prices to go up again, giving them the opportunity to fatten their profits.

Distributors, meanwhile, complain that recent increases in transportation costs have not been reflected in the government-set prices and that their troubles deepened earlier this year when the government lowered the mandated prices for oil products. This resulted in losses as the distributors still had to pay high prices on the international market. Now the companies are unable to maintain sufficient stocks.

As the government explores solutions, refineries are talking about adding capacity. The PetroVietnam group’s Dung Quat refinery is planning to expand its refining capacity by nearly 20%. That would allow it to produce about 170,000 barrels a day by 2026. Carrying out the plan is expected to cost more than $1.2 billion. PetroVietnam is wholly owned by the government. Management and government officials are in final talks to put the plan into action, though financing issues must be resolved before work on the expansion can begin.

The company also plans to build a complex in the southern province of Ba Ria-Vung Tau comprising a refinery and a petrochemical plant. A refinery near Ho Chi Minh City is expected to help reduce the cost of transporting petroleum products to the important commercial hub and surrounding region.