Wall Street Agrees: A Red Wave In The Midterms Will Push Stocks Higher 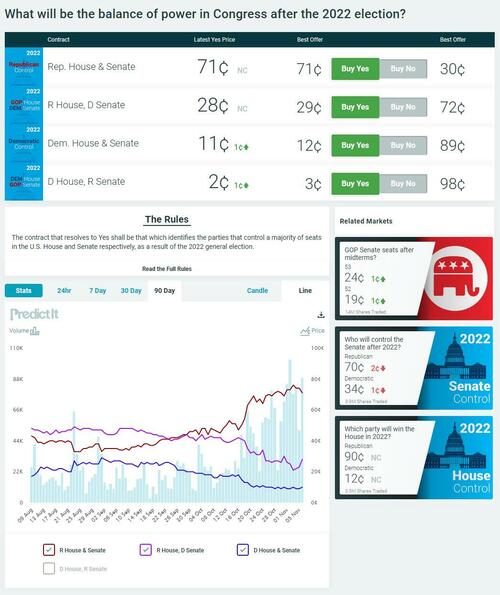 Well, technically, any outcome tomorrow will be beneficial for stocks, but a red wave should be especially bullish.

According to Deutsche Bank economists, their base case is that Republicans will take the House but Democrats will maintain their slim majority in the Senate, although they admit that the latter is a close call. And indeed, according to PredictIt, the odds of a Red tide (full sweep) have now risen to 71%, more than double from their early September lows.

That said, it is highly unlikely that either party will achieve a two-thirds majority in Congress, thus effectively maintaining President Biden’s veto power and  continuation of the mostly lame duck Congress courtesy of Joe Manchin (with a few notable exceptions).

While DB tries its best to remain impartial, Morgan Stanley has no such qualms, and in his latest Weekly Warmup note (available to professional subs in the usual place), chief US equity strategist Michael Wilson – who is becoming less bearish by the day – writes that investors should remain bullish on equities ahead of this week’s US midterm elections, because polls pointing to Republicans winning at least one chamber of Congress provide a potential catalyst for lower bond yields and higher equity prices, which would be enough to keep the bear-market rally going.

According to Wilson,  a “clean sweep” by the Republicans could greatly increase the chance of fiscal spending being frozen and historically high budget deficits being reduced, fueling a rally in 10-year Treasuries that can keep the equity market rising. And, echoing what we said all the way back in January, the only possible stimulus for the next two years – and with a bone-crushing recession on deck the US will definitely need it – will be monetary, which as everyone knows by now benefits mostly, if not only, asset holders while leading to general disinflation elsewhere in the economy.

How long until the market realizes that after the midterms, the only stimulus until (at least) Nov 2024 will be monetary pic.twitter.com/c89mILMHEj

However, as MS Public Policy Strategist Michael Zezas said over the weekend, there is a caveat as the results may not be clear on Tuesday night given the delay in counting mail in ballots which means we can expect price volatility in equity markets will remain high and provide ammo for bears and bulls alike.

For those who missed it, here again is Zezas listing the 3 key takeawas for investor from tomorrow’s midterms:

Turning to market statistics, DB proposes that there is no clear pattern for either the S&P500 or 10Y yields in the 12 months before or after the last 10 midterm elections… 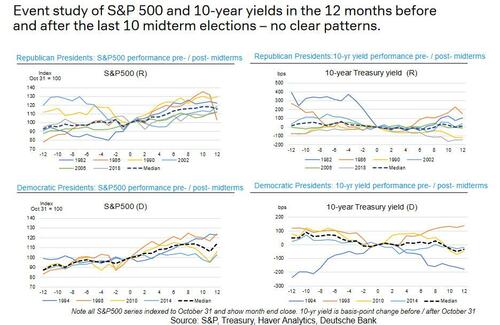 … although that is not strictly speaking true: as DB’s Jim Ried points out, “in every 12-month period post mid-terms over the last century, the equity market has always gone up with the inflection point being immediately after mid-terms.”

Others disagree: according to Evercore ISI strategist Julian Emanuel, viewed from a multiple-week perspective, history is on bulls’ side: in 19 midterm election years since 1946, stocks have advanced from late October through year-end every single time except 2018.

Still, a bearish take by markets can not be dismissed: with memories of politics-focused market jitters in the UK still fresh in investors’ minds, any lack of clarity about the US election outcome may trigger renewed equity declines: “The recent asset-market instability from politics in the UK and China” highlights “the near-term risk” of this week’s midterms, the Evercore strategists said in a note to clients. “Divided government, which appears to be investors’ preference” should “underpin equities into 2023, but any lack of clarity with regard to Senate control or loud questions about election integrity increases the likelihood that the S&P 500 joins the Nasdaq 100 Index in the retest of the lows.”

Below is a detailed presentation looking at the odds and market probabilities around tomorrow’s midterms courtesy of DB.