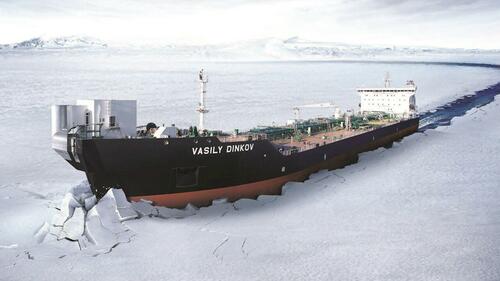 Western energy sanctions against Russia have helped Moscow achieve the second-ever sail of a crude tanker east through the Arctic Circle toward China, a route dubbed ‘Arctic Silk Road,’ that could one day revolutionize energy trade flows from Russia to Asia because it’s about half the time versus Russia’s Baltic ports through the Suez Canal.

Vessel tracking data compiled by Bloomberg shows the Vasily Dinkov, a specialized ice-breaking tanker, departed from Murmansk, a city in northwestern Russia, off the Barents Sea, hauling a cargo of crude. The vessel traversed Russia’s northern coast between Oct. 27 – Nov. 4 and entered the Bering Strait, a strait between the Pacific and Arctic Oceans that separates Alaska and Russia, on Nov. 5.

As of Tuesday morning, the tanker is full speed ahead off Russia’s Kamchatka Peninsula. Its final destination is the Chinese port of Rizhao on Nov. 17. 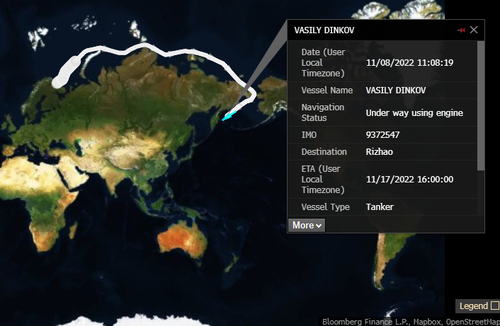 “The journey is the shortest passage between Europe and east Asia, taking half the time to reach China from Russia’s Baltic ports than the conventional route through the Suez Canal,” Bloomberg said.

Even before the war in Ukraine and the resulting sanctions on Moscow, trade flows were already in the beginning stages of shifting towards the Northern Sea Route.

In 2017, we noted, “transit routes through the Arctic will assume a certain level of importance vis-à-vis the global geopolitics of Russia and China.”

Visual Capitalist’s Nicholas LePan published a map of all the critical routes and resources in the Arctic in 2019. 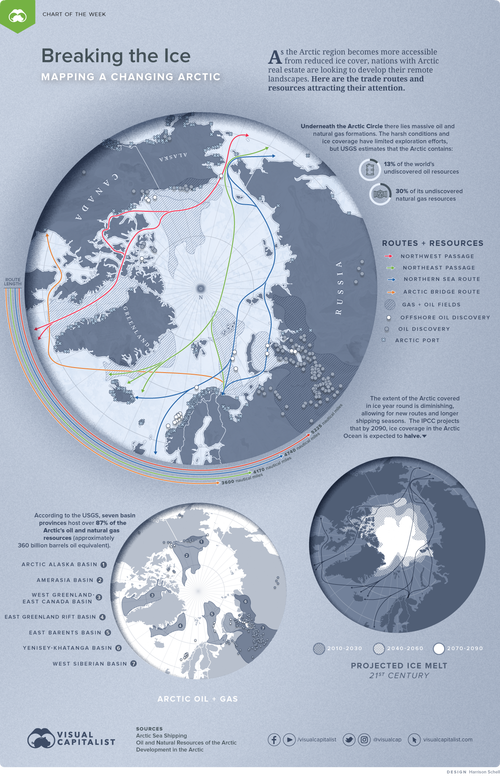 In early 2020, we detailed how Russia, owner of the world’s largest fleet of icebreakers, can plow through Arctic waters, clearing the way for vessels to traverse the northern routes.

And last year, we cited Minister of National Resources and Environment Dmitry Kobylkin, who said cargo shipping in Russia’s northernmost territorial waters would top 80MM tons as early as 2024.

However, there are significant logistical hurdles that rely entirely on weather conditions.

Richard Matthews, head of research at E.A. Gibson Shipbrokers Ltd. in London, told Bloomberg that the Northern Sea Route is only viable in the warmer period of the year.

“It looks unlikely that any significant volumes could be shipped along this route until summer,” Matthews said.

But Viktor Katona, a lead crude analyst at Kpler, said once spring arrives, the Northern Sea Route will be of “vital prevalence”:

“Europe is already sealed off.

“If they’re not buying, why circumnavigate the entire universe if you can use the Northern Sea Route to get to China in 20 days?” Katona said.

The first crude shipment across the Northern Sea Route took place in 2019. The second is currently underway. And as Western sanctions against Moscow rejigger global energy supply chains, Russia will have an advantage via the Arctic during warmer periods of the year in sending crude and crude products to Asia in an expedited fashion.