There’s no way of knowing how long a full reopening of China could take, but with very few investors fully positioned for such an eventuality, a case is building for those sectors with most at stake such as miners and luxury.

While China has denied speculation that it is set to shift away from its Covid-zero policy, some encouraging headlines out of the country have still fueled investor interest in industries that potentially have most to gain.

The European mining sector, one of the most exposed to Chinese demand, is up 8.5% since the start of this month, outperforming the broader market. Luxury stocks have also been strong, with Kering and Swatch both showing advances of nearly 10%. What’s more, none of those industries trimmed any of their gains after China’s denial.

According to JPMorgan strategists led by Mislav Matejka, sentiment toward the country has already hit “rock-bottom” and should improve from here. They are overweight miners, saying China’s economy is likely bottoming out and policy is set to become more stimulative. Resilient earnings, strong balance sheets and high dividends are other positives, they say.

The mining sector gets about 27% of revenue from China, according to Goldman Sachs strategists, with Rio Tinto at 57%, Glencore at 40% and Anglo American at 26%. Luxury has about 26% exposure, they say.

A basket of European stocks with the largest Chinese presence — including a bunch of miners and luxury shares, but also Volkswagen, BMW, HSBC, Infineon, ASML and Adidas — has underperformed the Stoxx 600 by nearly 10% this year, offering further catch-up potential on reopening chatter.

Barclays strategists led by Emmanuel Cau are less optimistic and remain skeptical that any full reopening is near, pointing to a likely deterioration of the virus situation in winter, and health officials’ reiteration of China’s commitment to its Covid Zero policy. That said, Cau sees such a possibility as “a wild card into 2023” that investors aren’t yet positioned for.

Chinese stocks halted a recent rally on Tuesday following a jump in Covid infections. The country reported 7,323 new local Covid cases for Monday, the highest daily number since April 30, according to data from the National Health Commission.

On the longer term, Cau says China reopening would be positive for global growth, commodities, EU and German equities, cyclicals and value, with semiconductors, luxury, autos, chemicals and industrials the most sensitive. Positioning on cyclicals is currently very bearish, with Covid Zero “likely a key reason,” he says. 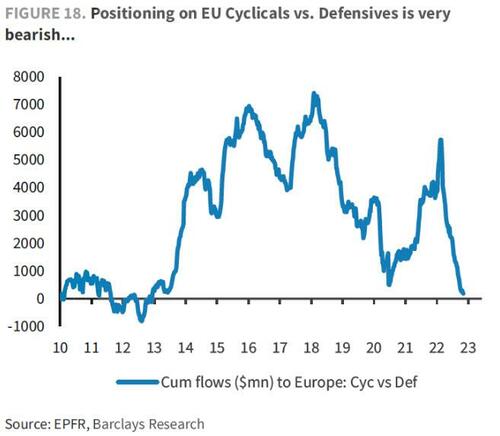 Overall, a China reopening would be a boon for Europe, according to Goldman Sachs strategists, who say the Stoxx 600’s explicit sales exposure to China is about 8%, similar to that of the UK and Germany, and more than France, Italy or Spain.

Still, any policy changes might be incremental before March and markets “may need to lower their expectations,” say Nomura economists including Ting Lu. Beijing is likely to stick to essential parts of Covid Zero for now, and a narrative shift to “living with Covid” may prove challenging, they say.