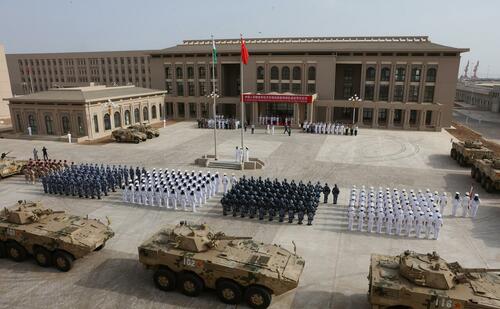 One of those revisions stated the need to “elevate our people’s armed forces to world-class standards” – according to an addition to the party constitution, as translated in the Hong Kong-based South China Morning Post. This is being seen as aimed at expansion of deployed assets overseas, also following widespread reports within the past year that Beijing is seeking to establish a string of bases on Africa’s Atlantic coast.

The revised constitution included an official explanation published alongside it which stated “Overseas safety and security has become a major issue that we must address” – in particular citing the need for beefed-up counterterror forces to better protect against attacks on Chinese institutes and companies in foreign countries.

According to further commentary of the changes via the SCMP:

Drawing on examples from China’s military defeats in the 19th century, it said international politics still followed the “law of the jungle”, with the strong in charge and able to uphold their will. The impact of a lagging military on national security would be fatal, it added.

It remains that compared to the United States or even Russia, China’s oversees military presence is tiny or almost non-existent. China has had a naval facility which opened in 2017 in Djibouti, long considered its main and lone military base abroad – not counting reports of one or possibly two outposts in Tajikistan, and the string of small bases in China’s backyard, on manmade island-bases in the South China Sea.

But as Foreign Policy, The Economist, and other Western geopolitical-focused publications have long previewed, China has ambitions for many more, especially in Africa. “Tanzania, Cambodia, and the UAE are on China’s wish list— and now Kiribati, within striking distance of Hawaii,” an FP report stated in summer 2021.

This week President Xi Jinping again reaffirmed his commitment to focusing on “preparing for war” with the country’s security “increasingly unstable and uncertain,” according to his latest declaration.