Midterms And Markets: The Good News And The Bad News

While stocks pummeled today on a toxic cocktail of bad news including the collapse of FTX, and the lack of a red wave, Deutsche Bank had some good news for investors who are now shaking ahead of tomorrow’s CPI print which could deliver the knock out blow should it come in hot.

So here is the good news: as DB strategist Jim Reid notes, in all 19 post WWII midterm cycles, the S&P 500 has always been higher 12 months after the elections were out of the way. You can see it here.

Additionally, in Reid’s Nov 8 Chart of the Day, he shows the performance of the S&P 500 through the four year election cycle with Y1 Q1 referring to the inauguration quarter of the new President and midterms being Y2 Q4. As one can see, the three quarters from midterms onwards are historically amongst the strongest quarters however far you go back. Indeed since 1949 they ARE the strongest three. Will history repeat itself? It may well do in the short -term as uncertainty lifts. 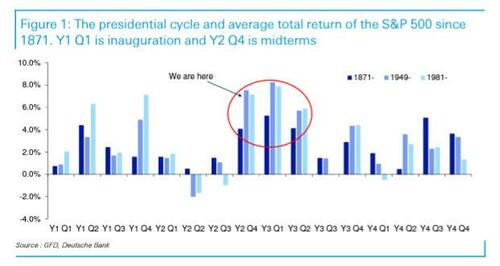 However before investors dump all their money in the stock market in hopes of a guaranteed 12 month return, here is the bad news in the form of a follow up analysis from Reid why we should be very careful about this analysis around midterms and positive markets in the subsequent 12 months.

The chart below shows the same 4-year presidential cycle as the one shown above, but instead of equity returns this time Deutsche shows the percentage of time in each quarter since 1949 that the US economy has been in recession. For example, Y1 Q1 has seen a recession within it just over 15% of the time over the last 73 years.

The real jaw dropper though is that over this period a recession has not started in year 3 of the election cycle. There have been legacy recessions that ended in Y3 Q1 but for the other Y3 quarters the graph shows a stunning zero percent. Given that equities tend to bottom on average mid-way through a recession one can see that history would suggest Y3 of the presidential cycle has always had a clear run in a way no other year has.

The obvious next question is whether there is a reason why Y3 has not seen a recession start during it since 1949. At a push an incumbent president might be more minded to allow a recession in Y1 and Y2 of the presidency to save bullets for the re-election campaign/legacy in Y4 (unless, of course, one is terminally confused about everything like Biden and his puppetmasters). Therefore recession risk might be front loaded in an election cycle (it could also all be completely random). 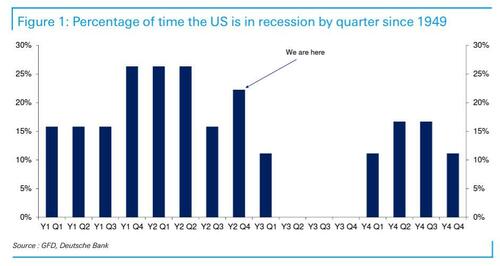 If the argument on lack of front-loaded stimulus above has any grounding, you can’t say it about this presidential cycle as the Biden Y1 saw the culmination of the largest stimulus package seen in history with no bullets left to fire now. So much so that the hiking cycle this year has been by far the most aggressive seen in any Y2 of the cycle.

Which is why this time can be a lot different to history. So, in conclusion, Jim Reid says that “the midterms and subsequent positive equity performance charts that you’re seeing from me and others have to be put in context. Unless of course you think the lack of a Y3 recession through history can be easily explained and is likely to repeat in 2023. If so, please let me know ASAP before I finish my 2023 outlook.”

More in the full reports available to pro subs in the usual place.