World’s Top Chipmaker To Build Another US Plant In Arizona 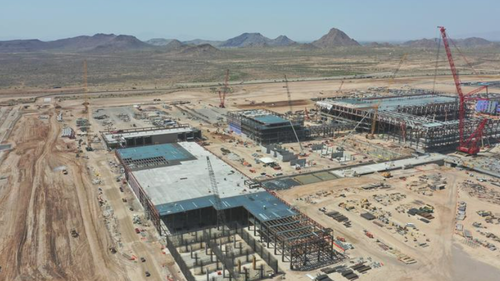 Currently, US semiconductors are a measly 10% of global production. Most chips are produced in Asia, particularly South Korea and Taiwan, and the Biden administration has pushed the Chips and Science Act to boost development and production domestically.

The CHIPS Act earmarks $52 billion to revert a decades-long trend of US production shifting abroad to low-cost labor regions. There was evidence some of this production is being reshored, according to a WSJ report, revealing Taiwan Semiconductor Manufacturing Co., the world’s largest contract chipmaker, is laying the groundwork for a second US factory in Arizona.

People familiar with the plans told WSJ that TSMC would soon announce one of the most advanced semiconductor plants just north of Phoenix, Arizona, next to another one of its chip factories. They said the investment in the new plant could be upwards of $12 billion, similar to what was committed in 2020 to build the factory beside it.

TSMC is making a big bet on the revival of US semiconductor production after increasing US-China tensions led Washington to pass the CHIPS Act to spur domestic semiconductor manufacturing.

“TSMC’s new facility would manufacture so-called 3-nanometer transistors, some of the tiniest and most lightning-fast currently possible,” the people said.

In a statement to WSJ on Wednesday, TSMC confirmed it was constructing a building to “potentially” house a second chip plant at its site in Arizona. The statement said it would add more advanced chip capacity there, though a final decision has yet to be announced.

The Biden administration’s move to rebuild semiconductor production in the US comes after a massive chip shortage in Asia that caused supply chain snarls for manufacturers of automobiles, electronics, and defense systems. The expansion signifies that reshoring supply chains from China and surrounding countries will ensure secured chip production during wartime.

TSMC, whose production plants are based primarily in Taiwan, has begun to diversify over the past year due to invasion threats by China.

In August, TSMC Chair Mark Liu told CNN that if China were to invade Taiwan and seize the world’s most advanced chip factories, it would cause devastating supply chain disruptions worldwide.

Apart from domestic initiatives, the Biden administration has slapped China with export restrictions on advanced chips and curbed the sale of chipmaking equipment. The restrictions attempt to slow advancements in China while buying the US time to rebuild its chip production base.