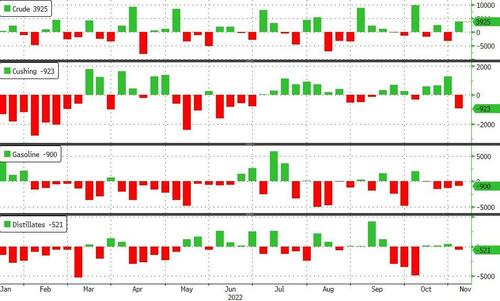 Oil prices are extending their losses this morning after last night’s bigger than expected crude build reported by API and perhaps on increasing odds of gridlock in Washington meaning less oil industry pressure from the left. Also, no signs at all from China of any easing in their Zero-COVID policies, with cases in Beijing hitting the highest in more than five months despite the nation’s program of lockdowns and mass testing, is not helping oil bulls.

“For now, the market worries about fresh lockdowns hurting sentiment and demand, and together with the API storage report it has triggered some light selling,” said Ole Hansen, head of commodities strategy at Saxo Bank.

“Especially after the failed attempt to break higher through recent highs earlier in the week.”

The official supply/demand data this morning is key for where we go next:

“Inventory numbers should be in focus this week as the U.S. will aim to extend last week’s small increase to distillate stocks, which remain persistently low,” said Robbie Fraser, manager, global research and analytics at Schneider Electric, in a daily note.

“Strong export demand has kept diesel in short supply, and some additional inventories would be welcomed ahead of a heating season that could carve out more room for diesel as global natural gas supply remains tight,” said Fraser.

API reported a major crude build overnight (despite analyst expectations for a small draw) and the official data confirmed it with a 3.925mm bbl build. Cushing stocks fell by the most since June and Gasoline and Distillates inventories drewdown… 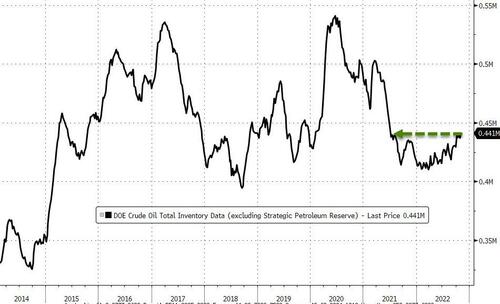 But, that 3.9 million barrel build in commercial crude stockpiles was almost completely offset by the withdrawal of 3.6 million barrels from the Strategic Petroleum Reserve. The net result was a nationwide crude build of just 350,000 barrels in the week to Nov. 4, the first increase in four weeks. 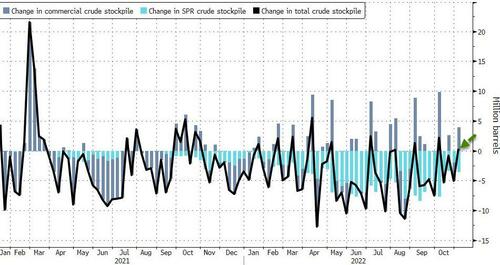 Total US gasoline inventories fell to their lowest level since 2014 last week. The blow of tight supplies is cushioned by soft demand — the four-week rolling average of gasoline supplied was 6% below the five-year average and barely hanging above 2020 levels.

Gasoline stocks in New York fell to their lowest since 2012… 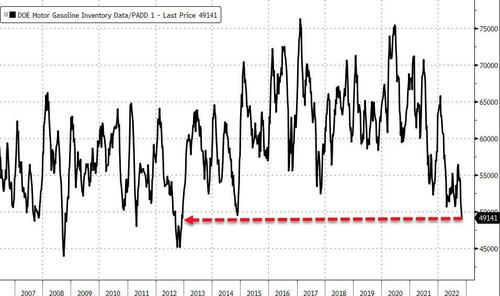 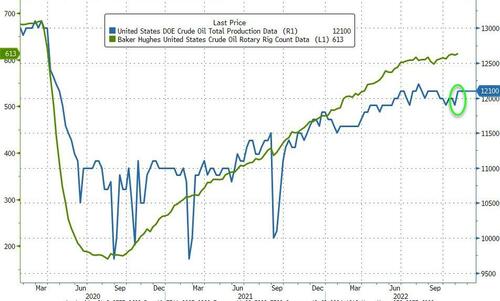 WTI was hovering around $87.25 ahead of the official data and extending losses after the confirmed crude build…

Finally, we note that this week saw the US government revise its 2023 domestic oil production lower once more to the dismay of the current administration, which has been urging drillers to boost output to cool consumer fuel prices.