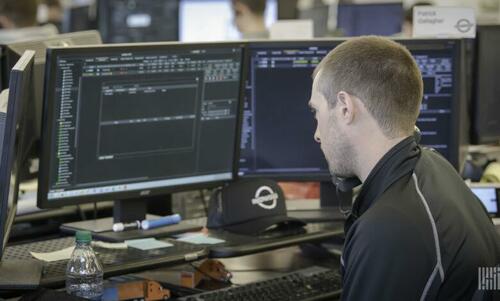 Freight brokers told FreightWaves that shippers are working contract rates down as the trucking industry enters bid season. For a few weeks in September and October, it appeared that contract rates were falling fast enough to start closing the gap between contract and spot, but spot carriers are again lowering their rates in lieu of a strong peak retail season materializing.

The national average outbound tender rejection rate fell to 4.28% Tuesday, a new low for the cycle that reflects a broad-based shift among asset-based carriers and freight brokerages alike from pricing strategies that maximize yield and margin to strategies to maintain asset utilization and volume.

‘We’ve seen an increase in the frequency of pricing events, which we welcome,” said Jamie Teets, CEO of Transportation One, a Chicago-based freight brokerage. “This allows for a fluidity in contract pricing that promotes higher levels of Primary Tender Acceptance (PTA), carrier performance and in turn overall shipper satisfaction. We still engage in annual RFPs but see the biannual or even quarterly model as more effective from an overall network management standpoint.” 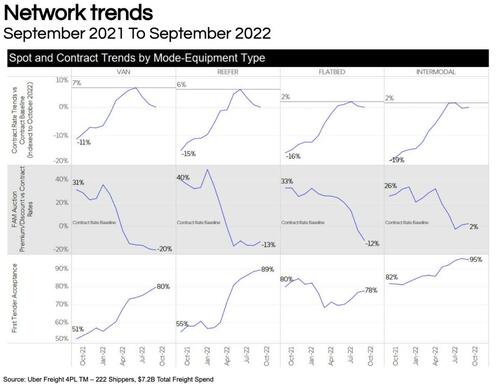 Loose capacity conditions appear to be prevailing across the majority of the U.S. trucking market, with little regional variation or troublesome “hot spots” where trucks are difficult to procure on a spot basis.

“There are no regions going against the grain as a whole,” a business analyst at a top 10 freight brokerage told FreightWaves, “maybe a little in the West, like the PNW, but it’s not noteworthy, just a little harder than in other areas.”

It’s normal in a down cycle for Los Angeles to see lower tender rejections than the broader market because carriers tend to reallocate their assets to the most reliable sources of freight, which oversupplies those particular markets. But the fact that major markets, regardless of region, are all below the national average is striking.

Spreads between truckload spot and contract rates are deeply negative, putting downward pressure on contract rates, as reflected in recent bids. When spot rates are well below contract rates, shippers have pricing power and can move their shipments on the spot market and reduce their cost, denying volume to their contracted carriers. Shippers use their volume leverage to pressure carriers to reduce contract rates, compressing the spread.

On the other hand, when spot rates are well above contract rates in a hot market, carriers reject their contracted freight and redeploy their assets into the spot market to fetch high rates per mile, using their capacity leverage to pressure shippers to increase contract rates and compress the spread.

Despite contract rates trending down, spot rates have fallen at the same pace, maintaining a deeply negative spot-contract spread and putting further pressure on contract rates. That relatively wide spread keeps freight broker gross margin percentages healthy, even as net revenue dollars per load deteriorates. In other words, although the “take rate” may remain the same, total dollars of margin generated per load are falling.

“‘We expect spot and contract pricing to intersect at some point in 2023,” Teets said. “Regardless of market environment, we continue to focus on strengthening our long-term partnerships on all sides of the shipment. We understand the cyclical nature of the North American full truckload marketplace and how our partners are affected at all stages of a market cycle.”

During C.H. Robinson’s third-quarter earnings call, CEO Bob Biesterfeld suggested that even Robinson’s traditionally aggressive approach to pricing — especially in scooping up volume with low contract rates in soft markets — has not been enough to grow volumes meaningfully.

“In our NAST Truckload business, we grew our year-over-year volume for the sixth quarter in a row, albeit with a modest shipment growth of 0.5%,” Biesterfeld said. “Volume growth in drop trailer, flatbed and temperature control was partially offset by a decline in our dry van volumes. Within the quarter, we saw mid-single-digit volume increases in July turned to declines in August and September as freight demand weakened.”

As the largest freight brokerage in North America by far, C.H. Robinson has a harder time taking market share than other non-asset players.

A business analyst at a top 10 freight brokerage told FreightWaves that so far, on his boards, “volume is holding up for us, we’re just seeing more capacity willing to drop rates. Retail peak usually gets going by mid-November, but there are no signs of it.”