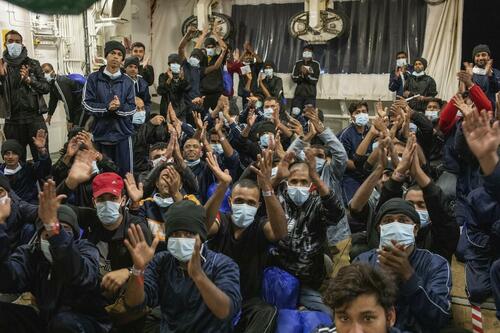 An NGO humanitarian vessel carrying hundreds of migrants picked up in the Mediterranean has been granted permission to dock in the French port of Marseille after the newly elected Italian government repeatedly refused it permission to offload passengers in Sicily.

A call took place on Tuesday between Italian Prime Minister Giorgia Meloni and French President Emmanuel Macron where the former emphasized the Italian government’s hard-line approach to immigration in no uncertain terms; this prompted the French president to authorize the docking of the Ocean Viking, operated by the SOS Méditerranée NGO, in France.

There are currently 234 migrants on board the vessel, which has been anchored off the Italian coast for over two weeks awaiting a safe place to dock.

The Italian government has in recent days allowed the docking of humanitarian vessels in Italian ports in order to allow vulnerable people, namely women, children, and those with medical conditions, to disembark. Italian authorities have then ordered the captains to leave Italian territory with a number of adult males still onboard, urging the ships to port in the countries responsible for operating the vessels, including Germany and Norway.

In a press release on Tuesday, the SOS Méditerranée NGO criticized the Italian government’s new approach, claiming “maritime and humanitarian laws were blatantly violated in Sicily, with the implementation of selective and discriminatory disembarkation processes of people rescued by the NGO vessels Humanity 1 and Geo Barents.

“Such a measure is not in line with the provisions outlined by the applicable international maritime and humanitarian conventions and resolutions,” said Nicola Stalla, Search and Rescue coordinator on board Ocean Viking.

“In terms of security and the fight against illegal immigration, Italians have expressed themselves at the ballot box, choosing our program and our vision,” the Italian prime minister wrote.

“Our goal is to defend the legality, security, and dignity of each person. This is why we want to put an end to illegal immigration, prevent further deaths at sea, and fight human traffickers. The citizens asked us to defend Italy’s borders, and this government will not betray its promise,” she added.

Conversations were held between Meloni and Macron, as well as between French Interior Minister Gérald Darmanin and his Italian counterpart Matteo Piantedosi, during which “Italy remained firm on its position,” according to the Ansa news agency.

According to the French television channel BFMTV, Paris denounced what it perceived to be “unacceptable behavior” by the Italian authorities and eventually offered the port of Marseille for the NGO vessel to offload those on board.