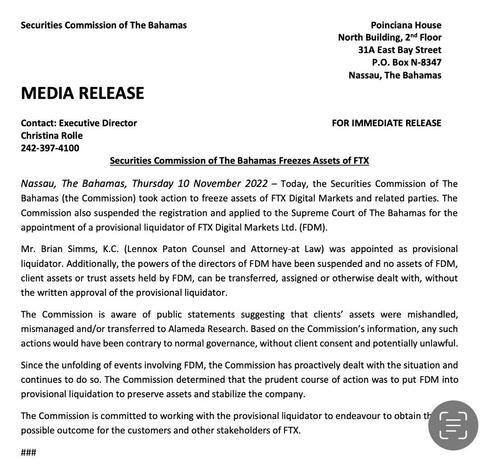 The Bahamas Securities Commission has frozen the assets of FTX Digital Markets “and related parties” and has appointed a provisional liquidator as the Bahamas securities regulator seeks to place the beleaguered crypto exchange into receivership, i.e. bankruptcy, the agency said in a statement issued late on Thursday.

The lockdown comes just hours after Sam Bankman-Fried said that he is closing his affiliated trading house at the center of the FTX scandal, Alameda Research, and after FTX said it may halt trading in FTX US, the remote US-based platform which has so far avoided scrutiny.

An asset freeze was “the prudent course of action” to preserve assets and stabilize the company, the agency said.

“The commission is aware of public statements suggesting that clients’ assets were mishandled, mismanaged and/or transferred to Alameda Research. Based on the commission’s information, any such actions would have been contrary to normal governance, without client consent and potentially unlawful” it warned

Meanwhile, while unconfirmed but certainly not unlikely, a rumor emerged on Twitter also late on Thursday that SBF had been arrested on the tarmac at the Bahamas airport.

The Bahamas crackdown comes as Japan’s government also ordered FTX.com’s local subsidiary to suspend some operations, saying it has no structure in place to properly offer cryptocurrency exchange services to users.

And while authorities finally crackdown on the biggest crypto fraud in history, who may or may not have been arrested, investors are starting to count their money, or rather lack thereof.

Take the Ontario Teachers’ Pension Plan, which said it had “invested” $95 million in Sam Bankman-Fried’s FTX International and FTX.US since October 2021. Pension plan initially invested $75 million in two FTX entities Oct. 2021 and made a follow-on investment of $20 million in January in FTX.US

The fund wanted to gain small-scale exposure to an emerging area in the financial technology sector, it says in a statement
“Naturally, not all of the investments in this early-stage asset class perform to expectations.”

The pension fund, realizing that the money is gone… all gone, was quick to add that any financial loss on this investment will have limited impact on the fund. FTX investment represents less than 0.05% of fund’s net assets.

Late on Thursday we also learned that the FTX-linked loss at Genesis Trading, an institutional crypto market maker, was nearly double, or $175 million “in locked funds” in its FTX account.

As part of our goal in providing transparency around this week’s market events, the Genesis derivatives business currently has ~$175M in locked funds in our FTX trading account. This does not impact our market-making activities.

And speaking of “gone… all gone”, it is ordinary retail investors who poured their life savings into crypto, for whom the stunning demise of FTX.com is a worst-case scenario.

“I’m done and I think a lot of retail traders are done,” said Christ Keuchkerian, a 36-year-old FTX.com customer in Quebec who works in IT and hadn’t been able to withdraw his funds as of Thursday. “I don’t think at this point I want to put any more money into this.”

Keuchkerian first started using FTX about a year ago, investing approximately C$4,500 ($3,360) in tokens like Bitcoin and Ether. He considered the platform “too big to fail.” When he heard the Binance deal fell apart, his heart started palpitating.

“If I’ve learned anything, it’s that centralized exchanges are dead,” he said. “The philosophy behind this movement was great, but the execution has been horrible. The people running the exchanges have been horrible.”

It’s not just FTX customers who may be hurt by Bankman-Fried’s downfall. The billionaire agreed to bail out Voyager in a $1.4 billion deal in September, as part of his distressed crypto buying spree, but the transaction still hasn’t closed. Voyager declined to comment on the status of the deal on Thursday.

John Gould, a 45-year-old software developer in Birmingham, Alabama, had about $2,000 in his Voyager account, mostly in altcoins, when the platform froze withdrawals. When FTX first announced it would acquire Voyager’s assets, he was optimistic he would be able to cash out, but he doesn’t think that will happen now.

“This is a like domino effect,” he said. “It’s definitely shaken my faith in exchanges.”

As Bloomberg adds, some retail traders who plan to keep investing in crypto say they no longer trust the exchanges and are moving their tokens to offline wallets. Considering that this is precisely what this website and other exchange skeptics have been saying for years is the only proper protocol, one can only say better late than never. If only it didn’t take massive losses to make people realize just what’s at stake.