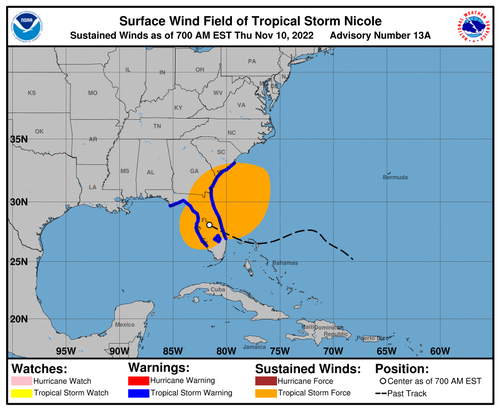 Hurricane Nicole made landfall on Florida’s east coast early Thursday as a Category 1 storm with maximum sustained winds of 75 mph, according to the National Hurricane Center.

Nicole made landfall on North Hutchinson Island, just south of Vero Beach, around 0300 ET, and has since been downgraded to a tropical storm.

The storm is now churning inland over central Florida near Orlando, bringing high winds and torrential rains as it moves west-northwest.

“Nicole remains a large tropical storm. Tropical-storm-force winds extend outward up to 450 miles from the center, especially to the north,” NHC said.

There are nearly 230,000 customers across Florida without power early Thursday.

At least 1,200 flights have been canceled within, into, or out of the US Thursday, according to data from the flight tracking website FlightAware. 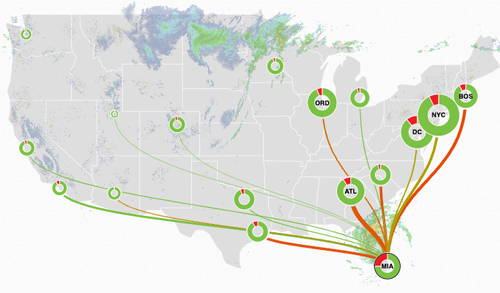 No other hurricane on record has made landfall so late in the season along Florida’s east coast, Phil Klotzbach, a tropics researcher at Colorado State University, tweeted.

Dr. Michael Mann, director of the Earth System Science Center at Penn State University, told USA Today that La Nina conditions are expected to continue through the end of the year and could produce increased storm activity into late fall.

Remember, the World Meteorological Organization Secretary-General Petteri Taalas recently said, “It is exceptional to have three consecutive years with a la Nina event.”

And according to the UN Office for the Coordination of Humanitarian Affairs:

“El Nino and La Nina are naturally occurring climate patterns and humans have no direct ability to influence their onset, intensity or duration.”