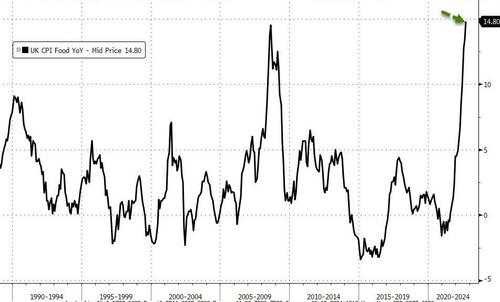 Brits have watched double-digit inflation wipe out any wage gains in one of the worst cost-of-living crises in a generation. Many have gone into debt, paying for things such as food, energy, and shelter. Others have been left with little or no discretionary income ahead of a very dark and cold winter.

Consumers are expected to pay an additional £682 in their annual grocery bill if they continue buying the same items.

The survey found that 27% of all households are “struggling financially,” double the amount from last November. Nine in ten respondents said food inflation is a top concern, while energy bills were second.

“So it’s clear just how much grocery inflation is hitting people’s wallets and adding to their domestic worries,” Kantar said.

Kantar revealed consumers are switching from name-brand items to cheap private-label store brands to save money:

Own label sales have jumped again by 10.3% over the latest four weeks, as shoppers adopt different strategies to manage their budgets. The branded goods market grew far slower at 0.4%.

In a separate study, the Joseph Rowntree Foundation found a whopping 7 million families have given up on heating, showers, and toiletries this year due to the cost-of-living crisis squeezing discretionary income.

The Centre for Economics and Business Research, which publishes the Asda tracker, found that after paying taxes for housing, heating, and food, 20% of earners in the second lowest income have nothing left to spend, according to Bloomberg.

Middle earners are also experiencing a decline in discretionary income.

Regionally, Brits in the South East have experienced inflation rates nearly doubled than those in the North East.

“[Food price inflation] when compounded with the massive energy spending increases has been seen by many as a significant risk to the economic stability of the UK.

“It is likely that food inflation will continue to increase as macroeconomic indicators have shown little sign of a slowing down in price growth while consumers continue to struggle with the ongoing cost of living crisis.”

Socioeconomic turmoil is only growing in the UK as it morphed into a political crisis. Government handouts might not cushion all households as inflation remains sticky at four-decade highs. 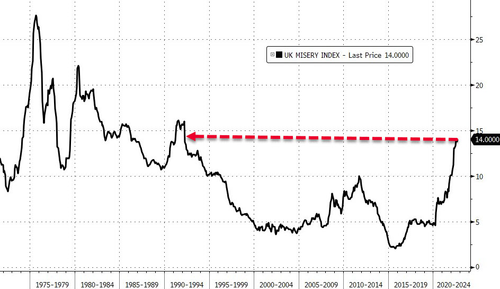 Uk’s new Prime Minister, Rishi Sunak, has a lot on his plate as he must suppress inflation while preventing social unrest, which will be a tricky balancing act as the cold season begins.