UK Nurses To Strike Over Pay For First Time Ever 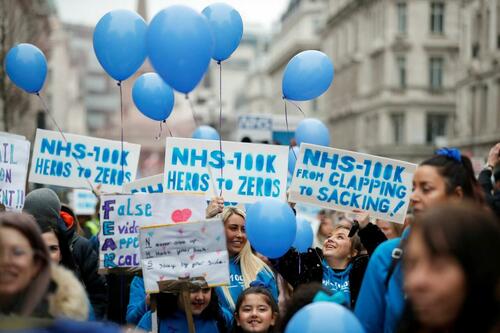 10s of 1000s of nurses across the majority of National Health Service trusts and health boards in the UK have voted to strike over pay for the first time ever in an action that threatens major disruption to an already strained health system.

The Royal College of Nursing (RCN), which has more than 300,000 members, said industrial action would begin before the end of the year following the first ever strike vote in its 106-year-old history.

The RCN said experienced nurses’ salaries are 20 percent worse off in real terms compared to ten years earlier, demanding a pay rise of 5 percent above inflation.

“Anger has become action — our members are saying enough is enough,” RCN General Secretary Pat Cullen said in a statement.

“This action will be as much for patients as it is for nurses. Standards are falling too low.”

The RCN’s demands would amount to combined pay rises costing £9 billion ($10.25 billion) which would be “simply not deliverable,” the spokesperson said, adding there were contingency plans in place for any “staff impact.”

As Lily Zhou reports at The Epoch Times, the union said the government must “signal a new direction” in its autumn budget announcement scheduled for Nov. 17.

Health Secretary Steve Barclay expressed disappointment in the union’s announcement, saying the nurses’ demands are “out of step” with the current economic circumstances the UK faces.

“We accepted the recommendations of the independent NHS Pay Review Body in full and have given over one million NHS workers a pay rise of at least £1,400 this year on top of a 3 [percent] rise last year,” the minister wrote on Twitter.

Barclay said he is “hugely grateful” for the hard work and dedication of NHS staff, including nurses, but said the “union demands for a 17.6% pay settlement are around three times what millions of people outside the public sector will typically receive and simply aren’t reasonable or affordable,” adding, “Labour have also refused to back this.”

Speaking to Sky News earlier, Education Secretary Gillian Keegan said another problem with ”massive above-inflation rises” is that it would in turn fuel inflation.

Shadow health secretary Wes Streeting accused the government of “unacceptable negligence,” saying Labour would have been “talking with the RCN and doing everything we can to prevent these strikes going ahead” if they were in government.

But he told BBC Radio 4’s “PM” programme he wouldn’t be able to meet the nurses’ demands either in current circumstances, saying, “the Conservatives [have] crashed the economy.”

Barclay, who got the job for the second time on Oct. 25 after being put in the role between July 4 and Sept. 6 owning to the recent shuffling of prime ministers, told broadcasters that he offered a meeting during his first week on the job.

RCN Scotland Board formally rejected an offer from the Scottish Government to give lower-earning nurses an 11 percent pay rise.

Britain has seen a wave of industrial unrest this year across a range of professions as pay hikes fail to keep up with inflation running at 10%.