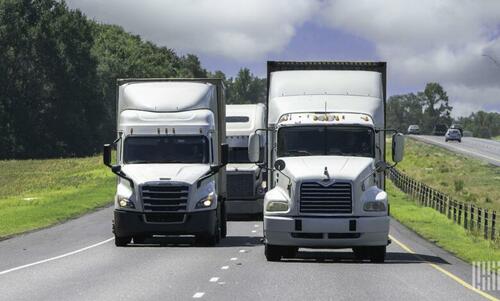 It’s not just tech giants and Wall Street firms any more. As FreightWaves reports, truck brokerage giant C.H. Robinson Worldwide Inc. is laying off between 1,000 and 1,200 employees, most of whom are at the vice president and general manager level, according to sources familiar with the situation. The move, as FreightWaves CEO Craig Fuller reports, “might be the largest layoff in the history of freight brokerages, not related to a bankruptcy or acquisition.“

This might be the largest layoff in the history of freight brokerages, not related to a bankruptcy or acquisition. https://t.co/NVfB20nMor

The move comes a week after the Eden Prairie, Minnesota-based company reported weaker-than-expected, third-quarter results and strongly hinted at impending labor cost reductions to combat the impact of slowing demand and increased costs.

“We got ahead of ourselves in terms of head count,” said Bob Biesterfeld, Robinson’s president and CEO, on a post-earnings call. Robinson employs nearly 17,000 people.

Biesterfeld said he did not forecast truckload demand declining as rapidly as it did, as well as spot market and contract rates deflating considerably.

In a statement Wednesday night, the company would not confirm the number of layoffs and disputed the number cited by sources, adding:

“As we said last week in our Q3 earnings, changes in market conditions, coupled with many successful endeavors on our digital roadmap directed at scaling our model to be more efficient, mean we are in a position to reduce our overall cost structure.

“As a result, we’re eliminating some positions at C.H. Robinson. These are not easy decisions, because we recognize the significant contribution of the impacted employees. We have tried to approach this with as much respect and empathy for our former colleagues as possible and are providing transition assistance.”

In addition, Robinson’s board formed a four-member capital allocation and planning committee, which the company said would recommend capital allocation, operations and strategies, including enhanced transparency and disclosures to shareholders. The panel is chaired by Winship and initially includes Scott Anderson, the company’s chairman, as well as Biesterfeld and Maier.