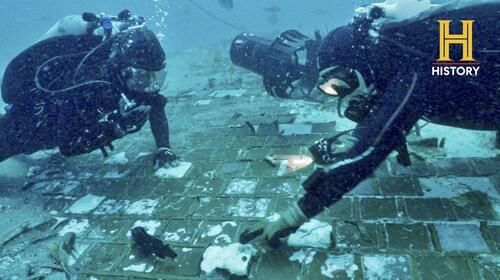 A large section of the U.S. space shuttle Challenger has been found on the Atlantic Ocean floor, more than 30 years after it exploded shortly after liftoff, killing all seven aboard, NASA’s Kennedy Space Center announced on Thursday.

The section remains partially buried, but measures at least 15 feet by 15 feet. Judging by the shape of its thermal tiles, NASA believes this piece is from the belly of the shuttle.

The shuttle piece was originally discovered in March, by divers working on a History Channel documentary series about the Bermuda Triangle. They were looking for World War II aircraft wreckage but were startled to find something very different just off Florida’s Cape Canaveral coast. The documentary will debut on Tuesday, Nov. 22.

Noting the “modern construction and presence of 8-inch square tiles,” the production team alerted NASA, the agency said in a press release. After studying the video, NASA verified it was from Challenger.

Challenger exploded on Jan. 28, 1986, just 73 seconds after liftoff. The last command given to the shuttle was “Challenger, go with throttle up.”

A spectacular explosion followed, and then stunned silence from both TV commentators and NASA launch commentator Steve Nesbitt. That silence ended when Nesbitt said, “Flight controllers here looking very carefully at the situation…obviously a major malfunction….we have no downlink.”

Evidence points to a grim conclusion: The astronauts likely survived the initial explosion. Among other indicators, study of wreckage found that at least three astronauts switched their emergency oxygen supply on.

Since the shuttle was 12 miles up when it exploded, the six NASA crew members and school-teacher Christa McAuliffe may have spent 2 minutes in sheer terror, knowing they were plummeting to certain death.

Though 118 tons of Challenger’s wreckage have been found so far, that’s still just under half of the total mass that lifted off that day. In 1986, the remains of all seven astronauts were recovered from the shattered wreckage of the crew compartment. As the New York Times reported at the time, the crew compartment was “little more than a pile of rubble on the ocean floor, 8 feet high and 50 feet across.”

Despite the huge volume of material that’s still unaccounted for, this is the first new section of the shuttle found since 1996, when two portions of the left wing washed ashore.

What they uncover off the coast of Florida, outside of the Triangle, marks the first discovery of wreckage from the 1986 Space Shuttle Challenger in more than 25 years. Don’t miss the premiere of The Bermuda Triangle: Into Cursed Waters on Tuesday, November 22 at 10/9C. pic.twitter.com/LWUoFXxEnK