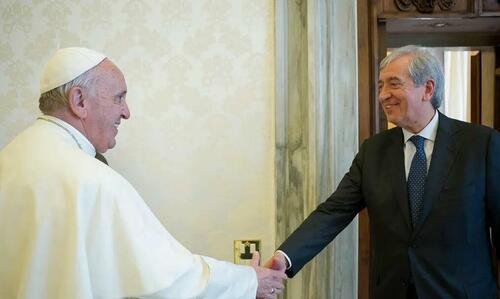 The Vatican’s former chief auditor, Libero Milone, says he was raided by gendarmes in June of 2017, after which he was accused of spying on top Vatican cardinals.

“Now you have to confess,” they demanded, according to Milone, who says he signed resignation papers instead of face time in a Vatican jail, the NY Times reports.

Since his ouster, the Vatican – which has been plagued with financial (and pedophilia) scandals for decades – has attempted to clean up its act. Cardinal Giovanni Angelo Becciu – who Milone was accused of spying on (and, Milone believes, was behind his ouster), has himself been booted from his position by Pope Francis, and is now standing trial in the Vatican for embezzlement and abuse of office in connection with a shady $135 million London real estate deal.

Milone, however, has come back under the spotlight after the Vatican reopened a criminal investigation against him in what he claims is an attempt to make him go away after filing a lawsuit against the Vatican’s Secretariat of State, its most powerful department, and the current auditor general.

“All these matters were reported to the pope. I wasn’t spying. I was doing my job,” he said.

“I didn’t know that I would find cardinals putting money in their pocket, but I found it. And I told him,” he said, referring to Pope Francis.

In their suit, Mr. Milone, the former chief executive of Deloitte & Touche Italy, and a fellow auditor, Ferruccio Panicco, who blames the Vatican for having contributed to the advancement of his prostate cancer and cut short his life span by confiscating and withholding his medical records, are seeking about nine million euros in damages. They say the Vatican unjustly terminated their contracts, sullied their professional reputations and essentially blacklisted them in Italy, where, Mr. Milone said, “You can’t cross the Vatican.” -NYT

According to Milone’s lawsuit, the Vatican is a “viper’s nest” of financial wrongdoing, hypocrisy, and a ‘reign of terror’ by internal spies within the gendarmes. What’s more, the complaint outlines how Vatican officials enrich themselves, or misappropriate funds to upgrade their apartments.

Milone says Pope Francis went from demanding personal PowerPoint presentations regarding his findings, to ignoring him when Vatican bureaucracy ‘poisoned his ear,’ and finally, to ‘personally demanding’ that he be fired.

The fired auditor says he was simply doing his job he was hireed to do.

In one case, auditors  discovered that some Vatican departments kept gold bricks and coins, however they claimed to have ‘lost the keys’ when asked to inventory them. Meanwhile, the Vatican department in charge of church-owned real estate repeatedly tried to block his investigations, and even hid financial records, Milone says.

He also accused cardinals, whom he declined to name now but said he would if his case went to trial, of pocketing tens of thousands and sometimes hundreds of thousands of the church’s dollars. He said he found that one cardinal received 250,000 euros in donations that he kept in a plastic shopping bag in his office. The prelate deposited an additional 250,000 euros, he claimed by accident, into his own personal account rather than into the account of the Vatican department that he ran. Mr. Milone informed Francis, who was furious, and instructed him to tell the cardinal that he had been caught, he said. -NYT

“This person became red. ‘But in my country I can do what I like,’” said the thieving Cardinal, who eventually returned the money.

Milone says Cardinal Becciu planted evidence that was discovered in the 2017 raid, after the head of the gendarme ‘knew precisely where to look,’ like ‘a bloodhound.’

“It is all done deliberately to get me out when they decided in March 2016 that I was a danger because I was asking too many questions,” he said.

In 2018, the Vatican’s chief prosecutor said there were no investigations against Milone – contradicting a 2017 statement that they had been investigating him for more than seven months for alleged spying and misappropriating funds for his own interests.

In 2019, Milone says Cardinal Parolin informed him that his case had been sealed by Francis.

When he sought to see the evidence compiled against him, the Vatican’s chief prosecutor replied in a January 2020 letter that he had ‘no right’ to see the information, declining his request.

Now, the Vatican has lifted the seal – but instead of sharing the information with Milone, they have reopened a criminal investigation against him.

“They want to threaten me,” he said, arguing that the Vatican was using ‘clearly fake’ evidence – including a forged documents dated months before he was even hired for his job.

Milone and his lawyers say they are ready to fight in court, even if the odds are stacked against them.